Japan’s Emperor Akihito has declared his abdication in a historic ceremony at the Imperial Palace in Tokyo.

In his last public address as emperor, Akihito handed over the symbols of power and thanked the public for their support during his 30-year reign.

The 85-year-old was given permission to abdicate after saying he felt unable to fulfil his role because of his age and declining health. 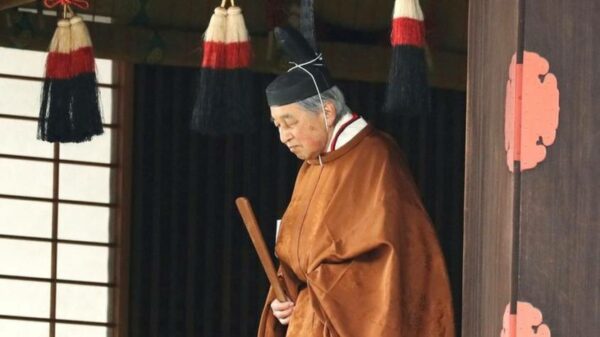 He is the first Japanese monarch to stand down in more than 200 years.

“Today, I am concluding my duties as the emperor,” the 85-year-old emperor declared at a ceremony at the Imperial Palace in central Tokyo.

“Since ascending the throne 30 years ago, I have performed my duties as the emperor with a deep sense of trust in and respect for the people, and I consider myself most fortunate to have been able to do so,” he said in his final speech.

Akihito assumed the throne on January 8, 1989, at the age of 55, following the death of Emperor Hirohito, in whose name Japan fought and lost World War II.

“I sincerely thank the people who accepted and supported me in my role as the symbol of the state,” the emperor said.

Emperor Akihito will formally hand over the throne to his eldest son Crown Prince Naruhito at midnight on Tuesday (1500 GMT).

“I sincerely wish, together with the empress, that the Reiwa era, which begins tomorrow, will be a stable and fruitful one, and I pray, with all my heart, for peace and happiness for all the people in Japan and around the world,” he concluded.

The premier thanked the emperor for “always sharing joy and sorrow with the people,” he said in his speech.

US President Donald Trump sent a message to the emperor and Empress Michiko ahead of his abdication.

“On behalf of the American people, the first lady and I offer our heartfelt appreciation” to the couple, the president said in a statement.

Trump and his wife Melania met the couple when they visited Japan in 2017.

The president and Melania are also scheduled to hold a meeting with new Emperor Naruhito in May when they travel to Japan as the first state guests after his enthronement.

Earlier in the day, the emperor, dressed in traditional robes, performed his last rituals at the palace, reporting his abdication to his ancestors.

The emperor and Empress Michiko will become emperor emeritus and empress emerita following the abdication, the Imperial Household Agency said.

The couple will not attend a second ceremony on Wednesday, which will mark 59-year-old Crown Prince Naruhito’s ascendance to the throne.

The imperial succession will mark the beginning of a new era for Japan, which lays claim to the world’s oldest monarchy.

The start of the new era has given some Japanese people a market opportunity. Some are selling T-shirts bearing the word “Reiwa,” others marketing “Reiwa” chocolates, “Reiwa” candies, and “Reiwa” rice crackers.

The Japanese public will have a chance to meet the new emperor, his wife, Empress Masako, 55, and other imperial family members on Saturday, when they appear on a palace balcony, the imperial agency said.

In mid-March, Emperor Akihito kicked off a series of ceremonies and rituals for his abdication, including his travelling to the mausoleum of Japan’s legendary first leader, Emperor Jimmu, in the western city of Kashihara.

On their last trip outside of Tokyo earlier this month, the emperor and the empress offered prayers at the Ise Jingu ancient Shinto shrine in central Japan. The shrine is dedicated to the sun goddess Amaterasu Omikami, the imperial family’s ancestral deity.

A week ago, the couple visited the tomb of Hirohito, Akihito’s father, in the Musashino Imperial Graveyard in the western part of Tokyo.

In a rare video message in August 2016, Emperor Akihito indicated his desire to renounce the throne, citing concerns that his advanced age and frail health could prevent him from fulfilling his official duties as the symbol of the state.

Since the emperor does not hold any political authority, he cannot discuss abdication directly. Japan’s parliament enacted one-off legislation in June 2017 allowing him to abdicate.

Japan’s imperial family claims the longest hereditary lineage in the world, stretching back more than 2,600 years, according to the government. However, the existence of legendary figures such as Emperor Jimmu has been contested.