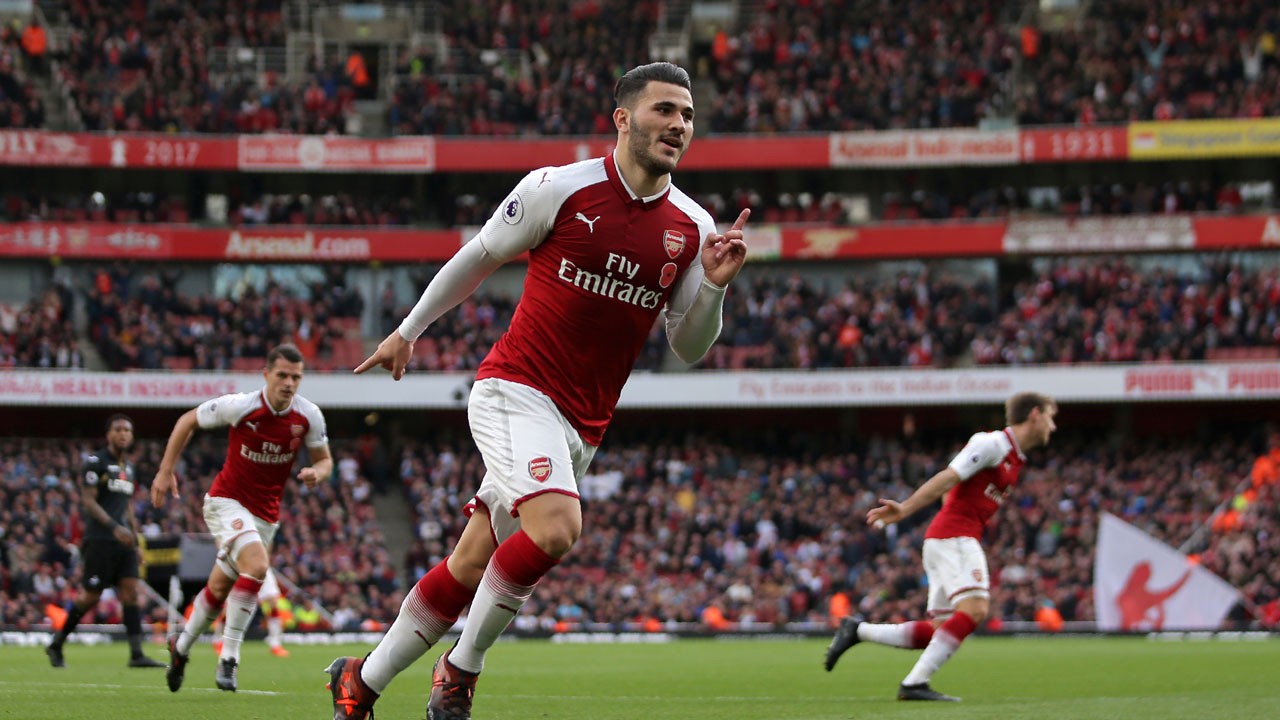 Arsene Wenger first made his name as Arsenal manager by discovering players that few rivals had spotted and signing them at bargain prices.

Victory in his 800th league game in charge, 2-1 against Swansea City at the Emirates Stadium on Saturday, came thanks to another player who attracted few headlines when he arrived at the north London club.

Sead Kolasinac, the Bosnian left wing-back, is unlikely to make the same sort of impact at Arsenal as Patrick Vieira or Thierry Henry, but his pre-season arrival on a free transfer from Schalke 04 proves Wenger can still spot unheralded talent.

Saturday saw Kolasinac scored his third goal for the Gunners, and first in the Premier League, to cancel out a first-half opener by Swansea’s Sam Clucas. Kolasinac then set up the winner for Aaron Ramsey.

“Since he has arrived he has convinced everyone that he is a good signing,” Wenger said. “And when you see the quality of his performance today, you can see there are still some good deals to make out here.

“Kolasinac was decisive today because he scored and made an assist. He has the natural qualities that suit his position as a wing-back, first that as a defender he is more offensive. And secondly because he has the body power in his game that you absolutely need in the Premier League.”

Wenger might have added that the Bosnian also has the willingness to play on despite injury that supporters appreciate. Although he finally came off the field 12 minutes from time, he did so reluctantly.

“He had a hip injury before but came back today,” Wenger said. “We hope to get him fit for next Sunday against Manchester City.

“He wanted to play on but it came back a bit too much and I thought there was no need to take a gamble,” the veteran French manager added.

Wenger’s first league game in charge in 1996 finished with the same raw scoreline albeit against a different opponent — “away to Blackburn, 2-1 for Arsenal,” he recalled.

Many away teams turn up at the Emirates intent solely on defending but Wenger, as he has often done, found a way to win the tactical battle and the game.

“At half time I was a little worried and I knew that Swansea had conceded only one away goal,” he said.

“It was important to play quicker, sharper, with more penetration, which we did in the second half.”

Paul Clement, the Swansea manager, bemoaned Andre Ayew’s failure to capitalise after catching Per Mertesacker in possession just before half time, Petr Cech saving his shot.

“It was a big chance,” he said. “Two-nil at half-time and it’s a different situation.

“We played well in the first half but they have so many talented offensive players that you have to stay focused for the whole game.

“Their first goal was a bit lucky — the ball was bouncing around. I was more disappointed with the second. We didn’t get the details right, we were too open.”