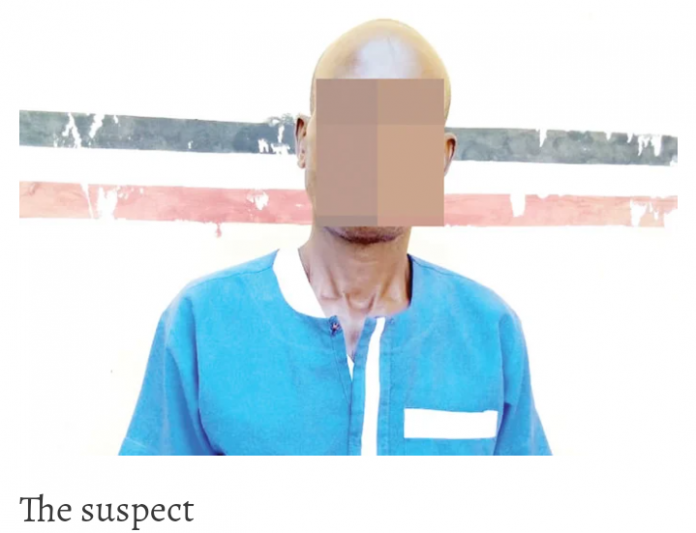 A 47-year-old security guard, Jacob Obomerelu, has been arrested by the Kwara State Command of the Nigeria Security and Civil Defence Corps for allegedly raping his 18-year-old daughter.

Obomerelu, who worked as a security guard in a residential building on Awolowo Road, Tanke area, Ilorin, allegedly had carnal knowledge of his biological daughter in a gatehouse that also served as his apartment.

The incident happened on Monday, December 6, 2021.

The victim, who moved out of her father’s house in 2017 after he separated from her mother, was adopted by one Alhaja Mariam Bello in the Gaa-Akanbi area of Ilorin.

The teenager returned to her father after she had a misunderstanding with her guardian.

PUNCH Metro gathered that Obomerelu had carnal knowledge of her on the first night that she stayed in the gatehouse with him.

“She said she begged him not to rape her, but all her pleas fell on deaf ears, as he behaved like a hypnotised person and later gave her N1,000 to buy drug to flush her system,” a statement by the NSCDC said.
A spokesman for the agency in the state, Babawale Afolabi, confirmed the incident, which he said occurred at the suspect’s workplace.
Babawale said, “On Tuesday, December 7, 2021, we were tipped-off by one Alhaja Mariam Bello, who claimed that the girl, who happened to be her adopted daughter, was raped by her biological father, adding that the victim used to live with her at her Isale Gaa Akanbi residence but moved out to stay with her dad after a little misunderstanding between her and the victim.”

He said Obomerelu, a father of four children from Edo State, confessed to the crime, but blamed it on the devil, adding that he was not in his right mind when he did it.

Babawale said the state Commandant of the NSCDC, Mr Iskilu Makinde, had ordered that discreet investigation be conducted into the case and the suspect charged to court.