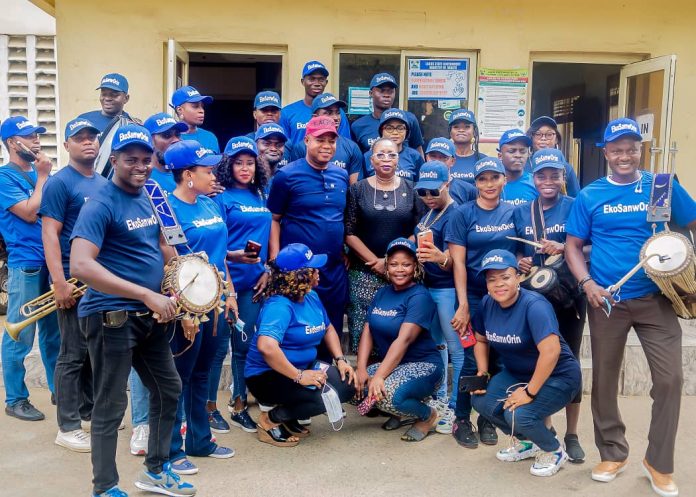 Some group of Grassroots Musicians who have been in the Lagos music scene for over 10 years most of them now in their 30’s,40’s in a bid to support Governor Babajide Sanwo – Olu’s developmental strides and empowerment programmes were at the Lagos State Ministry of Culture and Tourism to send goodwill prayers and messages to Mr Governor.

The team that was led by Adeleke Agboola aka Handsome Leke Jummy and Jare Adebayo popular Highlife and Juju Artistes in the State were received by Mr Solomon Bonu , Special Adviser to Governor Babajide Sanwo Olu on tourism, art and culture, Permanent Secretary Lagos State Ministry of Tourism Mrs Adenike Adedoyin Ajayi, and some of the ministry’s directors like Mrs Adanma Oni, Mrs Simpson, and other management staff.

In their speech they said their simple and straight message was in admiration and love they have for Mr Governor. They assured Mr Governor that they are committed to build a robust harmony and understanding between his regime and all Lagosians through musical entertainment.

To boost His Excellency morale they further reinterated that Mr Governor was a role model and father figure to youths in the state and should not be deterred by the prevalent information disorder generated by different recent occurances in Lagos. They applauded Governor Sanwo- Olu for his persistence and track record of integrity and assured that all dismayed sheep shall be returned to a happy collective fold and that truth and trust shall soon be resolved for the betterment of all Lagosians particularly the aggrieved youths.

All dressed in EkoSanwOrin branded tops they showed their unflinching support and readiness to March with Mr Governor for peace and unity in Lagos State as they all chorused a special song for Mr Governor.

The lyrics of the song below:

Sanwo-Olu Awa Feran Re
(Sanwo Olu We love you)