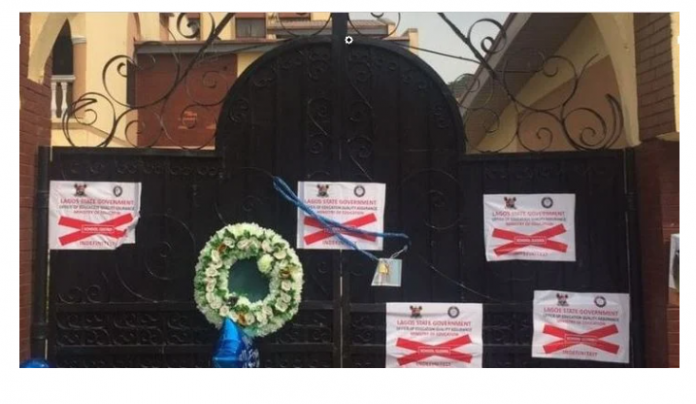 The Lagos State Government, on Sunday, sealed off the Dowen College in the Lekki area of the state over the death of a 12-year-old pupil of the school, Sylvester Oromoni Jnr.

The news of Sylvester’s death went viral on Wednesday following a social media post by his cousin, Perry Oromoni, who alleged that some senior pupils of the college beat him up in his hostel for refusing to join a cult.

But the school denied the claim, stating that the boy complained of pain in his legs and hip following an injury he sustained while playing football.

The state government on Friday ordered the indefinite closure of the school pending the outcome of an investigation into the matter.

However, officials of the Lagos State Ministry of Education stormed the school in the early hours of Sunday to seal off the premises.

The Public Relations Officer of the ministry, Ganiu Lawal, told one of our correspondents that the school was sealed off to avoid any interference with the investigation being carried out.

He said, “We issued a statement two days ago that the school has been shut and that we are conducting an investigation into the causes of the incident that claimed the life of Sylvester Oromoni and that was the basis of sealing off the school.
The sealing off of the school is to make sure the investigation goes unhindered, so that nobody will have access to the place and to respect the family as they grieve and to give befitting honour to the boy, who died. We have already sent the school management a letter officially communicating to it that the school has been shut down; so, we just followed it up with the sealing off of the gate.”

The Public Relations Officer of the Rapid Response Squad, Femi Malik, said the RRS provided a security backup to officials of the ministry, who sealed off the school.

A Senior Advocate of Nigeria, Chief Mike Ozekhome, has asked that the Principal of the Dowen College, Lekki, Lagos, where a 12-year-old boy was allegedly tortured by senior students and died from complications days after, be made to face the law for negligence.

Ozekhome said the school authorities, who were supposed to monitor their students but had defaulted due to negligence, should be dealt with in accordance with the law of the land.

Ozekhome told one of our correspondents, “Shutting the school is not enough. The principal, heads of all units, supervisors and other staff should be charged for negligence. It is more or less like a conspiracy to murder. For the school to be said to be led into such a stupid conclusion that the boy was playing football and was quickly rushed to the sickbay, all of them should be charged for conspiracy and being accomplices after the fact. If they did not instigate, at least, they complied with.

“The school authorities themselves that are supposed to monitor their students with some house masters, mistresses and supervisors, who due to negligence, defaulted and neglected to take care of that ward that was left in their care, are also involved and they should be dealt with in accordance with the law of the land.”
In response to reports that the parents of some of the alleged torturers had fled the country, Ozekhome said, “The so-called big men, who have allegedly ferried their children abroad to escape justice, have to be made aware that the arm of the law is very long. Even if it means extradition; they should extradite those students to come and face the law.

“All the students involved in the act of torturing that young deceased Nigerian must be brought to justice. It is a crime to bully, assault and literally beat up a classmate. They do not have any immunity against prosecution.”

He also urged the government to do a thorough investigation into the matter and ensure that all the culprits were brought to justice “as urgent and as soon as yesterday.”

Meanwhile, the family of Buruji Kashamu has denied their son, Adewale’s involvement in the killing of Sylvester.

The family in a statement released on Sunday and signed by Mutairu Kashamu, noted that Adewale, during a private enquiry, confirmed to have been a school father to the deceased last session but denied his involvement in the alleged bullying that led to Sylvester’s death.

Mutairu, who noted that the family had been cyber-bullied since the incident went viral, urged the state government and the police to carry out a thorough investigation into the matter.
The statement read in part, “Since the news of the unfortunate incident broke, we have made our own private enquiries and carefully questioned our son about his involvement and some of the true facts now slowly emerging from under the mass of lies are that our son, Adewale Michael Kashamu, had acted as a school father for the late Sylvester in his first session in the school at the request of Sylvester’s sister who is also a student of the school.

“However, in the 2021 session commencing in September 2021 Adewale Michael Kashamu was moved to a different floor in the boarding house and engrossed in his own studies and activities, he was no longer as close to Sylvester as in the previous session.

The National Association of Nigerian Students, on Sunday, asked foreign missions to deny entry to the five students of Dowen College alleged to have bullied and beaten Sylvester to stupor, which led to his eventual death on November 30, 2021.

The body also called for the swift arrest of key officials of the Lekki-based school.

The NANS President, Sunday Ashefon, stated this in a statement on Sunday titled, ‘Sylvester Oromoni’s death: NANS calls for immediate arrest of school principal, house master…urges foreign missions in Nigeria to ensure suspects do not sneak into their countries’.
The PUNCH had earlier reported that the father of the deceased student alleged that the Junior Secondary School 2 pupil died from the injuries he sustained during an assault by colleagues, who wanted to initiate him into cultism, but the school claimed that he died after sustaining an injury during a football match.

The father also fingered five boys, whom he said were allegedly involved in bullying his son.

The father also said the teachers, security men, and other officials of the school must explain the death of his son, whose 12th birthday was celebrated posthumously on Saturday.

Ashefon said, “We equally call for the immediate arrest and interrogation of the students mentioned in the attack that led to the eventual death of Sylvester, irrespective of how highly placed their parents are. There must not be any sacred cow as all of them must be arrested, adequately interrogated, and charged if found culpable.

“By this press statement, we put on red alert foreign missions in Nigeria to deny entry to the students, who had been fingered in the attack leading to the death of Sylvester Oromoni until the investigation is concluded.

“NANS will follow this case religiously in our attempt to be the voice of the voiceless and ensure a level playing ground in the cause of the investigation irrespective of how influential and wealthy the families of the purported culprits are.”

Pastor asks schools to weed out toxic students
The Lead Pastor of The Transforming Church, Rev Sam Oye, on Sunday, joined the call for justice to be done in the death of Sylvester.

While calling on parents to be committed to the parenting of their children, otherwise they would be raising “dysfunctional children,” who would not give them rest in the future, he advised school owners to “revisit their management system in order to identify, isolate and eliminate toxic and potential violent children.”

The cleric expressed these views in a message titled: ‘Justice must not be delayed or denied Sylvester’, in Abuja on Sunday.

He faulted the claim by Sylvester’s father that his son’s death was “a sacrifice” for other children, saying nobody should attempt to play games with the boy’s death like the #EndSARS protest.

The Rotary Club of Lagos postponed its presidential dinner earlier scheduled for Sunday due to the sad event at Dowen College.

The President of the club, Wale Agbeyangi, disclosed the postponement in a statement on Sunday, adding that the college was a partner of many years.