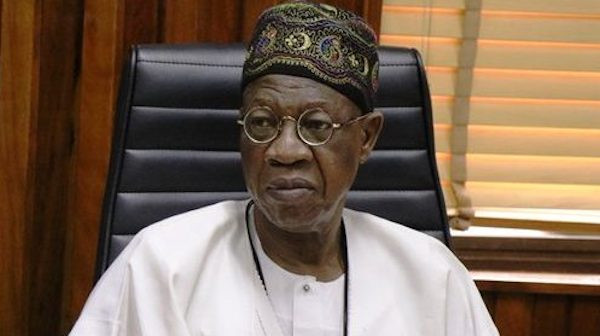 Human Rights Writers Association of Nigeria says that the statement by Minister of Information and Culture, Lai Mohammed, rubbishing the report of the Lagos panel on the Lekki shootings, when his principal, Major General Muhammadu Buhari (retd.), is awaiting the White Paper to be released by the Lagos State Government goes to shows that there is no cohesion between the Federal Government and the sub-nationals.

The PUNCH had earlier reported that the Justice Doris Okuwobi-led panel on November 15, 2021, submitted its report to the Lagos State Government, noting that at least nine persons were confirmed dead at the Lekki toll plaza when soldiers stormed the tollgate to disperse EndSARS protesters on October 20, 2020.

The 309-page leaked report stated, “The atrocious maiming and killing of unarmed, helpless and unresisting protesters while sitting on the floor and waving their Nigerian flags and while singing the National Anthem can be equated to a massacre in context.”

Lagos State Governor, Babajide Sanwo-Olu, who received the report, said he had constituted a Committee to bring forward a White Paper within the next two weeks to be considered by the Lagos State Executive Council.

United States Secretary of State, Antony Blinken, on a two-day official visit to Nigeria last week, had said that the submission of the report by the Lagos panel was an important step towards accountability for killings and rights abuses allegedly committed by some operatives of the Nigeria Police Force and the Nigerian Army.

Blinken had met with the Nigerian President at Aso Rock in Abuja, and Buhari had said the Federal Government was waiting on Lagos State and other state governments to come up with their conclusions.

Instead of sitting for all of one year, the panel could have just compiled social media tales by the moonlight on the incident and submitted, saving taxpayers’ funds and everyone’s time. That report is nothing but the triumph of fake news and the intimidation of a silent majority by a vociferous lynch mob.”

Reacting, HURIWA National Coordinator, Emmanuel Onwubiko, told The PUNCH on Tuesday that the minister disrespected Sanwo-Olu by rubbishing the panel’s report before the release of the White Paper by the state government.

The HURIWA coordinator said, “The reaction of Lai Mohammed stridently denying the clear and evidently proven massacre of gargantuan proportions in Lekki Toll Gate on 20th October 2020 and his attempt to rubbish and discredit the report of the illustrious Lagos State Judicial Panel on #EndSARS protest, is a demonstration that there is no coherence and cohesion in government at the centre.

“It shows that there is truly nobody at the Centre who is providing leadership in which case the cabinet-level ministers are doing and saying whatever they deemed alright in their warped imagination to say or do.

“The Minister of Information Lai Mohammed has succeeded in revealing the spectacular collapse of the Presidency and that governance is now through an autopilot mode. It is sad, pathetic and disappointing that the Minister spoke even before a White paper is published by the Lagos State Government and it shows that he has no respect for the sensitivity and sacredness of the many lives that were needlessly wasted by soldiers and police.

“He has no valid reason to remain as a minister because he has lost all modicum of self respect and I think Nigerians will no longer take the Federal government serious if he remains in office as the official spokesperson of the Government.