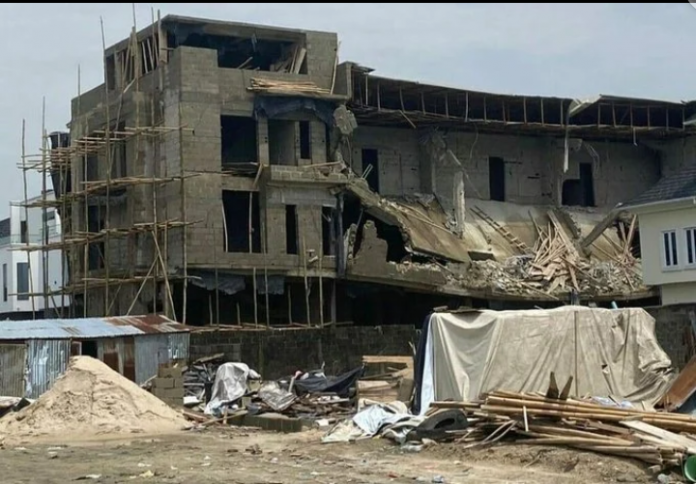 It was a pitiable sight, yesterday, as residents and victims’ families watched rescuers pull out 19 dead bodies out of the rubble of the 21-storey building, which collapsed on Monday at Gerard Road, Ikoyi, Lagos.

Some family members gathered in clusters at the scene to pray for the survival of trapped construction workers.

Emotions flowed when Ayodele Omotuyole, brother-in-law to Samuel Iwelu, one of the victims, stormed the scene with the picture of the man, who came into the country from the United Kingdom on Saturday to attend a wedding in Abuja.

The man was believed to be among those trapped in the rubble of the collapsed building.Also, a woman was seen calling the names of her son, Tunde Isaiah, to come out alive.

Another woman, whose daughter, Oridamola Zainab, is a youth Corper serving with the construction company said: “My daughter is trapped here and we have been here since yesterday, I want her alive.”

A construction worker, who survived the incident, Gabriel Bassey, told newsmen that about 50 persons were still trapped in the rubble.

While rescue operations were ongoing, news came that another building had collapsed in Osapa London in the Lekki area of the state.

Images shared online showed that a part of the building, which was under construction, collapsed following last Monday’s downpour, but there was no recorded casualty.

But Lagos Deputy Governor, Obafemi Hamzat, who arrived at the Ikoyi scene, around 11:00a.m, yesterday, assured that the state would ensure that everyone trapped in the building is rescued.

He said: “Our focus is on how to get the people out. This morning, we took out two people and they are receiving treatment in the hospital. So, in total, we have taken out nine persons and two persons have been discharged, but sadly we recovered 10 dead bodies.

“It’s difficult to get the number of people trapped, because it’s not yet a residential building, but we had people, who said they think there are 24 people trapped, while another claimed they are 28. So, we don’t know, but we have some names and some of the victims were responding when names were mentioned.

“We understand that some people came in to inspect but were also trapped. We hope to get more alive. Our focus is on saving lives and we are mobilising everything we need to save lives and that’s why I’m here.”

The deputy governor stressed that the location was sealed about four months ago because the relevant agency came in to do a structural test and discovered some abnormalities that needed to be corrected.

According to him, the second building will also be audited in terms of integrity test and if found wanting, then the appropriate action will be taken.

He said: “It is important to also announce that we have an agency that is supposed to do this job and that’s why they came in around July to check. We do that regularly and we just hope that people will understand the need for the state to ensure that we shut down a building when there’s an abnormality.”

He also promised that the state will take full responsibility for the treatment and medical bills of rescued victims of the Ikoyi building collapse.

The deputy governor also visited some of the rescued victims of the Ill-fated incident who are on admission at the General Hospital, Lagos.Hamzat, who spoke to journalists after the visit, explained that nine people, all male, have so far been rescued from the debris of the building, adding that three of the rescued victims were treated and discharged on the spot while the remaining six are presently on admission receiving treatment at the Medical Emergency (LASEMS) unit of the General Hospital, Lagos.

While noting that those admitted are responding well to treatment and doing well, the deputy Governor noted that the injuries sustained by those presently on admission are minor injuries, which are not life threatening.

He however mentioned that some casualties who were brought in dead have been deposited at the morgue.

Speaking in the same vein, the Permanent Secretary, Ministry of Health, Dr. Olusegun Ogboye, who accompanied the Deputy Governor on the visit, assured the rescued victims of quality healthcare service at the facility, stressing that trained medical personnel are on ground to aid their recovery process.

THE Inspector General of Police (IGP), Usman Alkali Baba, who arrived at the scene about 4:07p.m, has called for strengthening of regulations to forestall future occurrence.

He said: “This is a major incident and rescue operation is going on and the police and other security agents are involved. So, I am here to sympathise with the families of those involved and also encourage the rescuers.

“We need to strengthen the regulations that are necessary. If anybody is found to have compromised, we will prosecute. An investigation will be conducted.”

Also, speaking with The Guardian, Chairman, Nigeria Institute of Architects (NIA), Lagos Chapter, David Majekodunmi said they have tried their best in the institute in collaboration with the state governor to check building collapse.

He regretted that young professionals of these days don’t want to go through tutelage before venturing into the real estate sector.

He said: “They pulled out two dead bodies right before me. We are talking of material testing, there’s only one material testing laboratory in Lagos today. Recommendation were made over 13 years ago to have other certified laboratories testing places and we are calling on the government to do the needful to stop the menace.”

In a statement by the State Commissioner for Information, Gbenga Omotoso, the governor said the government would find out what went wrong and punish those indicted in the collapsed building.

It said: “The Governor, as a first step, has directed that the General Manager of the Lagos State Building Control Agency (LASBCA), Mr. Gbolahan Oki, an architect, be suspended from work immediately. The suspension is indefinite.

“It will independently investigate the remote and immediate causes of the incident and make recommendations on how to prevent future occurrence. The investigation is not part of the internal probe already being conducted by the government.”

Also,  professionals under the aegis of Nigerian Institution of Estate Surveyors And Valuers (NIESV) Lagos State branch,  has cautioned property developers in Lagos to desist from cutting corners  during building development.The group said Lagos has had enough of a bitter account of building collapse leading to loss of lives and investments worth billions of naira in the last two decades as findings revealed that from 2011 to 2019, over 84 buildings collapsed across Nigeria with only 21 out of the 84 occurring outside Lagos.

The chairman of the branch, Mrs. Olabisi Demola-Alade called on landlord, developers, real estate investor, housing stakeholder, professional and experts in the built environment to embrace the laws and international best practices relating to erection of buildings such as LASBCA and other relevant agencies.

Meanwhile,   the Minister of Humanitarian Affairs, Disaster Management and Social Development, Sadiya Umar Farouq has sympathised with the people and government of Lagos state  over the tragic incident.

She also directed mobilisation of immediate emergency response towards rescue operations at the site.

The minister, who disclosed this yesterday in Abuja, expressed shock at the incident, announced that NEMA team from the Lagos office has been mobilised to assist with the rescue operations.

Similarly, the Speaker, House of Representatives, Femi Gbajabiamila, has sympathised with victims and relations of the collapsed building.

The speaker regretted that the incident happened at a time the Lagos State Government was doing everything possible to make the lives of Lagosians safer.

A  statement from his special adviser, Media and Public Affairs, Lanre Lasisi, quoted the law maker as calling for adequate measures to forestall future occurrences.

He also urged relevant authorities to double efforts at rescuing those trapped in the multi-storey building.

In a statement yesterday, George, who mourned with the victims of the disaster and their relatives, said the development was a reflection of greed, arrogance of power and sheer lawlessness demonstrated by those governing Lagos.

Also, the Edo State Governor, Mr. Godwin Obaseki, has commiserated with his Lagos State counterpart, Babajide Sanwo-Olu, families of victims and the people of Lagos State over the building collapse.

The governor, who expressed sadness over the incident, urged the authorities to beef up emergency operations to ensure the rescue of those still trapped under the rubble.

According to him, “We are deeply saddened by the news of the collapse of a 21-storey building in Ikoyi, Lagos. Our hearts are with the government and people of Lagos State, especially the families who lost their loved ones in this incident.

“While we urge the government and relevant agencies to intensify efforts to ensure the rescue of those still trapped in the rubble, we pray for the repose of the souls of those who lost their lives in the unfortunate incident.

“On behalf of the government and good people of Edo State, I offer my deepest condolences to Governor Babajide Sanwo-Olu, the people of Lagos State and the affected families over this painful incident.”