Home Headlines ‘I Look Forward To Working With You’ — Buhari Congratulates Soludo On... 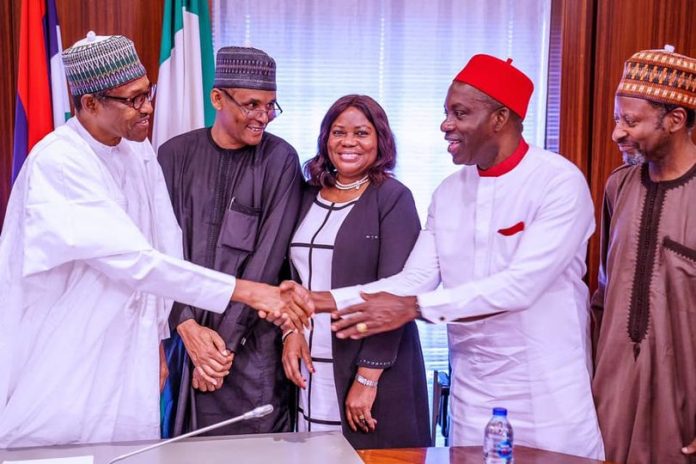 President Muhammadu Buhari has congratulated Chukwuma Soludo, former governor of the Central Bank of Nigeria (CBN), on his victory in the Anambra governorship election.

On Wednesday, the Independent National Electoral Commission (INEC) declared Soludo, candidate of the All Progressives Grand Alliance (APGA), as the winner of the election.

Florence Obi, returning officer for the state, announced the results.

The APGA candidate secured 112,229 votes to defeat his two major rivals — Valentine Ozigbo of the Peoples Democratic Party (PDP) who got 53,807 votes, and Andy Uba of the All Progressives Congress (APC) who secured 43,285 votes.

Congratulating the governor-elect, Buhari, in a statement on Wednesday, by Femi Adesina, presidential spokesperson, asked Soludo to mobilise other stakeholders to address the “enormous challenges” facing Anambra and the region.

The president commended security agencies and INEC for the “successful conclusion of the exercise despite the initial challenges encountered”.

“The president praises the security agencies for their determination to ensure that the election went on as smoothly as possible, and the Independent National Electoral Commission (INEC) for the successful conclusion of the exercise despite the initial challenges encountered,” the statement reads.

“President Buhari enjoins Prof. Soludo, member of the Presidential Economic Advisory Committee, to rally other stakeholders to tackle the enormous challenges confronting the state and the south-east in general.

“The president looks forward to working with the incoming governor for the peace, security and development of not only Anambra State, but the entire country.”