Kano State government has abolished the dichotomy between the Higher National Diploma (HND) and Bsc holders in the state.

Gov. Abdullahi Ganduje of Kano made this known during the workers day celebrations at Sani Abacha Stadium on Wednesday in Kano. 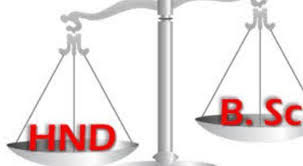 According to Ganduje, the decision to abolish the dichotomy is part of his administration’s effort to boost the morale of civil servants in the state.

He said his administration was working assiduously in enhancing the welfare of civil servants.

Ganduje explained that arrangements had been completed for the implementation of the new N30,000 minimum wage approved by President Muhammad Buhari.

According to Ganduje, his administration will continue to give priority to the welfare of civil servants and all residents of the state.

He appealed to the state government to implement payment of allowances for workers of state tertiary institution as applicable to their colleagues in the Federal civil service.

Ado-Minjibir urged civil servants to reciprocate government gestures by being committed to duty through efficient productivity and better service delivery.

Why Governors Are Afraid Of Signing Death Warrants – Ganduje