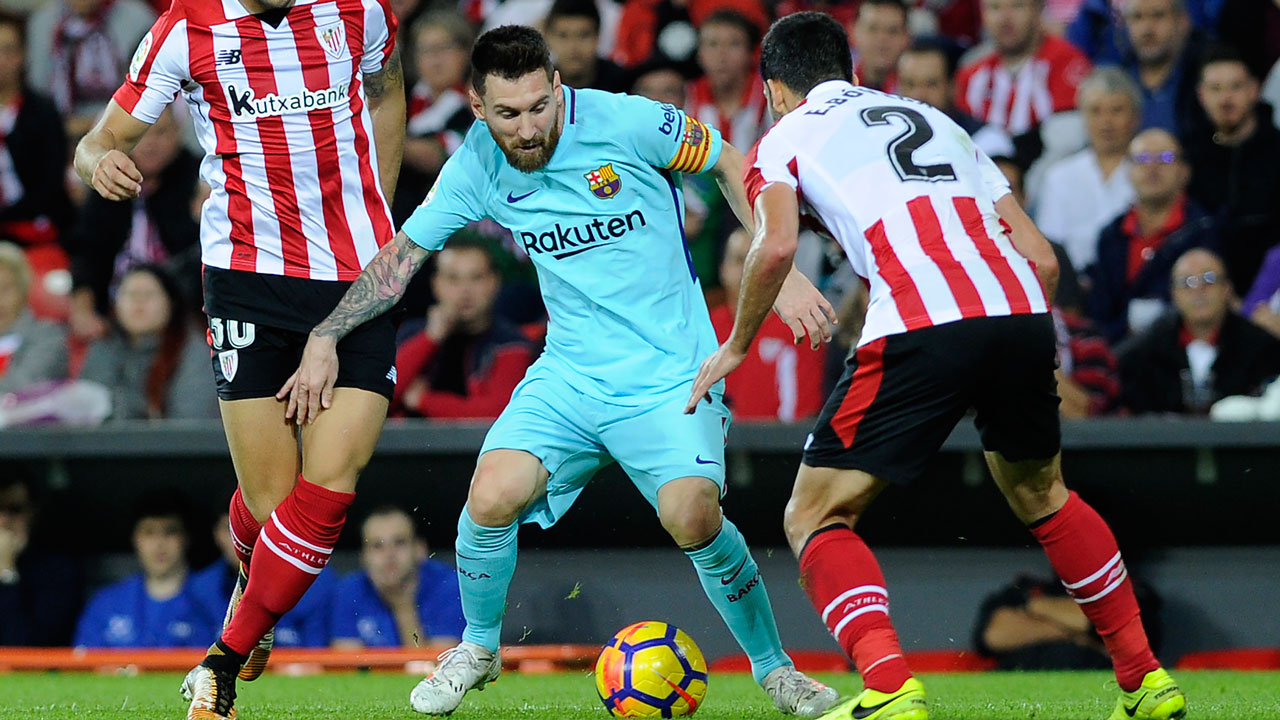 Barcelona recorded their best ever start to a La Liga season as coach Ernesto Valverde enjoyed a successful return to Athletic Bilbao thanks to goals from Lionel Messi and Paulinho in a 2-0 win on Saturday.

Valverde has now overseen 12 wins and a draw from his first 13 La Liga and Champions League matches as Barca reestablished their four-point lead at the top of the table over Valencia, who beat Alaves 2-1 earlier on Saturday.

The Catalan giants also move eight points clear of rivals Real Madrid, who are in action on Sunday amidst a backdrop of political turmoil as they travel to Catalonia to take on Girona.

“The truth is we struggled a lot, especially in the second-half,” Barca midfielder Sergio Busquets told Movistar TV.

“They had chances to equalise, but with a counter-attack at the end we scored the second which leaves us with this spectacular start.”

Valverde left Bilbao in the summer and his impact has been felt just as much in Bilbao as it has in Barcelona — Athletic have now one just one of their last 12 matches in all competitions.

“Athletic pressed us hard in the second-half and made it difficult,” said Valverde.

“We gave the ball away a number of times and, without creating too many clear-cut chances, Athletic are always a threat when the ball is bouncing around the area.”

The hosts started the brighter and only a stunning save from Marc-Andre ter Stegen prevented Aritz Aduriz from slotting Athletic in front on 19 minutes.

Barca, and Messi in particular, grew into the game as the half wore on and the Argentine should have opened the scoring when he hit the woodwork for already the 10th time this season with the goal at his mercy from Luis Suarez’s pass.

Messi was at the heart of another flowing team move to break the deadlock eight minutes before half-time. He exchanged one-twos with Paulinho and Jordi Alba before sweeping home the left-back’s low cross.

Paulinho should have extended the visitors’ advantage when he smacked the crossbar moments later, but an under-par Barca had to withstand plenty of Athletic pressure after the break.

But Barca held out to record a ninth clean sheet in their last 13 games, and added a second deep into stoppage time when Paulinho tapped home the rebound after Kepa Arrizabalaga had parried Suarez’s first effort.

After two seasons in the doldrums, Valencia’s stunning revival under Marcelino Garcia Toral continued as they remain Barca’s closest challengers with victory in Vitoria.

Simone Zaza blasted Valencia into the lead 10 minutes before half-time from Manchester United loanee Andreas Pereira’s cut-back for his ninth goal of the season.

Alaves levelled through Alexis’s header early in the second period, but Rodrigo’s penalty after Rodrigo Ely handled a cross inside his own box gifted the visitors all three points.

“It has completely changed, not just our level of play but also our mentality,” Zaza said of Valencia’s upturn in form since Marcelino took charge in June.

“The coach has helped a lot in that. Now we are competitive and can compete against anyone.

“We are second and we have to enjoy it. We don’t know how far we can go, but we have a lot of ambition.”

Atletico Madrid remain fourth, level on 20 points with Real Madrid, but their stumbling season continued as they were held 1-1 at home by Villarreal for their fifth draw in 10 Liga games.

Diego Simeone’s men’s problem has largely been finding the net but they went in front just after the hour mark in spectacular fashion as Angel Correa cushioned Antoine Griezmann’s volleyed pass into his path before slotting home at the near post.

However, in another recurring theme of Atletico’s season, they sat far too deep in trying to defend their lead and were punished nine minutes from time when Carlos Bacca flicked home a header from a corner.

“If the team continues with that aggression and intensity, better times will come,” insisted a defiant Simeone, whose side face a must-win Champions League clash against Qarabag of Azerbaijan on Tuesday.

Sevilla leapfrogged Villarreal into fifth as goals from Wissam Ben Yedder and Pablo Sarabia earned a much-needed 2-1 win over Leganes to ease the pressure on coach Eduardo Berizzo.