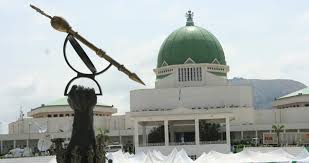 FILE: A cross-section of parliamentarians during the presentation of the 2021 Appropriation Bill by President Muhammadu Buhari to a joint session of the National Assembly in Abuja on Thursday (8/10/20). Photo: NAN

The National Assembly and the Nigeria Governors’ Forum on Tuesday condemned the United Kingdom’s travel ban on Nigeria.

The lawmakers and the NGF in their separate reactions to travel ban imposed on Nigeria by the UK on Saturday, demanded a reversal of the travel restriction.

At the plenary on Tuesday, members of the House said Nigeria and other African countries were being bullied by Western countries for failing to look inwards and develop their economies.

The Minority Leader of the House, Ndudi Elumelu, moved a motion of urgent public importance, titled ‘Need to Intervene in the Suspension of Issuance of Visitors Visa to Nigerians by the United Kingdom Government,’ which the lawmakers unanimously adopted after a long debate.

Moving the motion, Elumelu said though the ban was for Nigerians going the UK, “it does not exempt over 8,000 Nigerian travellers that have bought air tickets to visit Nigeria during this festive period, as the restriction would affect their re-entry into the UK after holidays.”

The lawmaker also said instead of working with Nigeria as a Commonwealth ally on ways to combat and curtail the spread of the new variant, the UK decided to ban Nigerian travellers.

Elumelu said, “The House is further worried that the UK Government chose to announce the ban without discussing the data in its possession with the Nigerian Government and instead gave an hour’s notice to the Nigeria authorities before its inclusion on the Red List, contrary to known international convention.

Adopting the motion, the House mandated its Committees on Health and Foreign Affairs to interface with the Ministries of Health, Foreign Affairs and the Presidential Steering on COVID 19 “on best ways of resolving this issue.”

Also, the Senate condemned the UK’s inclusion of Nigeria in its COVID-19 red list without justification.

The red chamber described the travel ban as discriminatory and an attack on diplomatic relations between the two countries.

The chamber, accordingly, called on the British authorities to consider removing Nigeria from the red list.

It advised the UK government to be sensitive to the diplomatic relationship between both countries when taking decision that affect Nigerian citizens.

The Senate urged the Federal Government to engage the British authorities to reverse Nigeria’s inclusion on the red listIn a related development, the NGF on Tuesday rejected the ban placed on travellers from Nigeria by the UK, Canada and other countries.

It described the ban as “arbitrary stigmatisation” and called on the United Nations to look into it.

This was contained in a statement titled, “Omicron: The NGF Rejects Arbitrary Stigmatisation,” signed by the Chairman of the NGF and Ekiti State Governor, Kayode Fayemi, on Tuesday.

The governors noted that the decision to place a ban on Nigeria without a careful study of the facts on ground was discriminatory because nations with higher infection rates were not affected by the ban.

Fayemi said, “Only three cases (before Tuesday) of the Omicron variant of the coronavirus were detected in Nigeria less than a week ago, precisely on December 1, 2021.

“Canada and the United Kingdom have hastily included Nigeria among the Omicron present countries which must stay away from their shores, an action viewed by the NGF as precipitate, unfair and discriminatory.

“Omicron still remains relatively unknown globally as it is not yet clear whether it is more transmissible from person to person compared to other variants including Delta.”