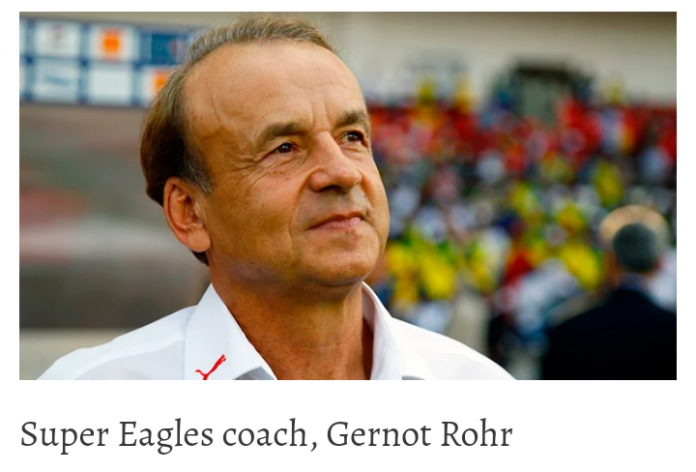 THE Nigeria Football Federation is considering hiring Serbian Mladen Krstajić as new head coach of the Super Eagles, The PUNCH has learnt.

Pressure has mounted on the NFF to sack Eagles head coach, Gernot Rohr, after the national team put up an underwhelming performance against Cape Verde in their Qatar 2022 World Cup Group C final qualifier at the Teslim Balogun Stadium, Lagos, last Tuesday.

Federation officials held a crucial meeting to decide the future of Rohr, following the nervy 1-1 draw against the Cape Verdeans, to evaluate Rohr’s performance since he took charge of the team August 2016.

The Franco-German’s current deal expires December 2022, but the Eagles’ recent poor run of form, which included a 1-0 home defeat to minnows Central African Republic in the qualifiers for the 2022 World Cup, sparked calls for his dismissal.

It’s understood that both the NFF and Rohr have entered into negotiations on how to part ways by mutual consent.

In a chat with The PUNCH on Sunday, a top official of the federation, who spoke on condition of anonymity, told our correspondent Krstajić was among the coaches the NFF was considering, adding that they had not taken a final decision, since Rohr had not been sacked.

“We haven’t taken an official decision yet, but Serbian Malden Krstajić is one of the coaches we are considering for the job,” our source said.

We cannot hire a new coach when the current coach has not been sacked. So, I don’t know where the online platforms got their stories from. Like I said, he’s among those we are considering for the job, but we haven’t given him a job yet.”

Krstajić managed Serbia’s national team from 2017 to 2019, leading them to the 2018 World Cup in Russia, where they crashed out from the group stage.

He quit as manager of FK TSC Bačka Topola, a Serbian SuperLiga side, last October, after just 10 months in charge, thus fuelling speculations he might be the next man for the Eagles’ coaching role.

EPL: You Can Do More With Man Utd Than PSG – Michael Tells Pochettino

EPL: None Of My Business – Thomas Tuchel Reacts To Solskjaer’s Sack

Dennis Happy With Win Over United