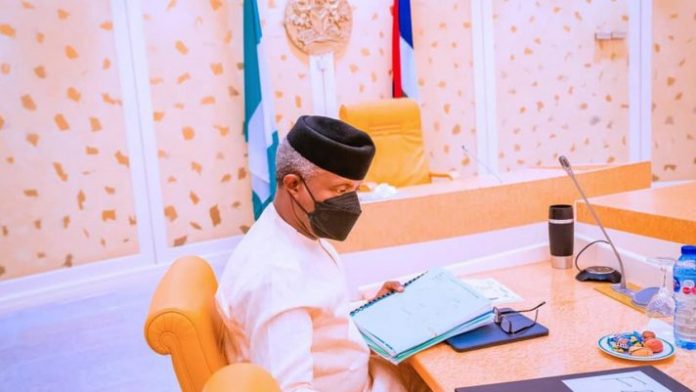 Vice President Yemi Osinbajo has said that not only is the capacity of the public sector critical for national development, efficient civil service is also vital for the running of governance and for quality public service delivery.

Osinbajo said this on Monday at the commissioning of the new multi-billion-naira civil service secretariat complex in Asaba, Delta State capital, which was named after the Asagba (traditional ruler) of Asaba, Prof. Chike Edozien.

Senior Special Assistant to the Vice President on Media and Publicity, Laolu Akande, disclosed this in a statement titled, ‘An efficient civil service crucial for national development, governance–Osinbajo.’

The Vice President, who was received at the Asaba airport by the Delta State governor, Dr. Ifeanyi Okowa, noted that “the civil service is the very tip of the spear of governance, and optimal public service delivery requires an efficient civil service.

“Such a public service requires training, and capacity building but also workspaces that are well equipped, conducive, and inspirational. We have heard already how inspired the public servants today are and they are even spending long hours in the office.

“This is very commendable indeed. Public servants require environments that bring out the best in them. This secretariat complex will provide such an environment.”

Osinbanjo, who described the new secretariat as a state-of-the-art, functional, and befitting secretariat complex, said it was befitting that the the name of one of Delta State’s and Nigeria’s most illustrious sons is being immortalised.

According to him, “in naming this building after His Royal Majesty, you are not just celebrating a highly respected and deserving son of Delta State and Nigeria, you are also signaling the sort of excellence in public service that we wish to see incubated within this complex.

The Vice President commended Delta State Governor, Dr. Ifeanyi Okowa, for recognising the critical role of the public sector. He said the governor saw the project to its completion, “despite dwindling revenue receipts and severe resource constraints across all levels of government in our country.”