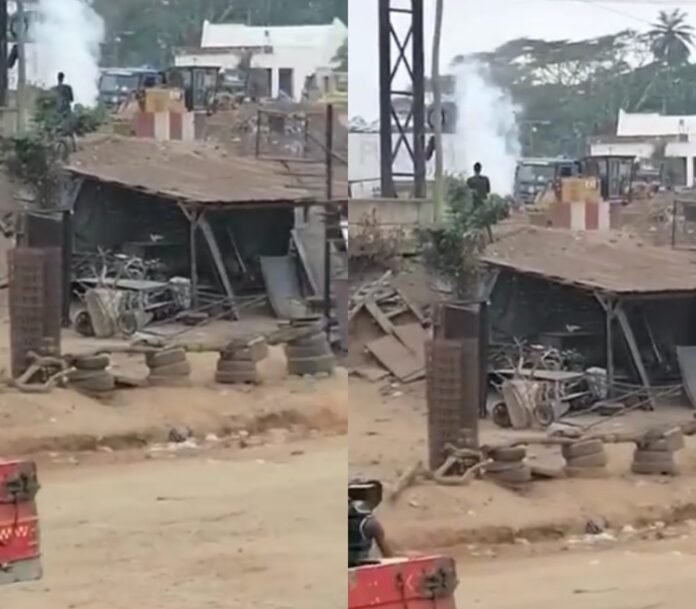 Business activities in some parts of the Computer Village, Ikeja, Lagos State, were grounded following a gas leakage in front of the Awolowo House, a complex in the area.

PUNCH Metro gathered that businessmen and women were operating around 7am on Wednesday when an underground gas pipeline was ruptured.

Gas fumes permeated the environment as people fled in panic.

Emergency responders were said to have arrived at the scene and sprayed chemicals to neutralise the gas which had pervaded the community.

Our correspondents learnt that the company in charge of the pipeline, Gaslink, was contacted to shut down supply along the pipeline route.

A trader, who identified himself only as Segun, said task force officials in the market ordered all business persons to switch off their generators and close their shops.

He said, “When I got the information that gas was leaking, I observed that the place had been cordoned off as something like smoke was coming out of the ground. The market leaders told all shop owners to go home.

“We were told not to switch on our generators; even the commercial buses operating around the premises of the gas leakage were told to leave.”

Another trader, who identified himself only as Pastor, said the pipeline was mistakenly punctured by road construction workers in the area.

He said, “Due to the extension of the road and the bridge they constructing, they have been demolishing buildings close to the bridge; the buildings affected are on Kodesho and Awolowo roads.

“It appears that some of the diggers who took part in the demolition punctured the pipeline. So, maybe the leakage worsened and we started smelling gas today. Emergency responders were alerted and when they came, they poured chemicals everywhere to quell the odour.”

The state Police Public Relations Officer, CSP Adekunle Ajisebutu, said there was no cause for alarm, adding that the situation had been brought under control.

The Director, Lagos State Fire and Rescue Service, Magaret Adeseye, said the danger had been averted.

She said, “On arrival at the scene, it was discovered that a gas pipeline belonging to the Gaslink was accidentally punctured and gas started gushing out. In a bid to forestall any secondary incident, the fumes emanating from the leakage were blanketed with a chemical foam compound, just as the area was swiftly cordoned off and traffic diverted, while inhabitants were sensitised not to make naked fire.”

Meanwhile, some shops were gutted by fire opposite Owode Onirin Market, on the Ikorodu Road, Lagos State.

Confirming the incident, Adeseye said while putting out the fire, officials of the fire service were attacked by yet-to-be-identified persons.

She, however, stated that the situation was eventually brought under control.

Ganduje Who Begged Me To Join APC Has Sidelined Me –...