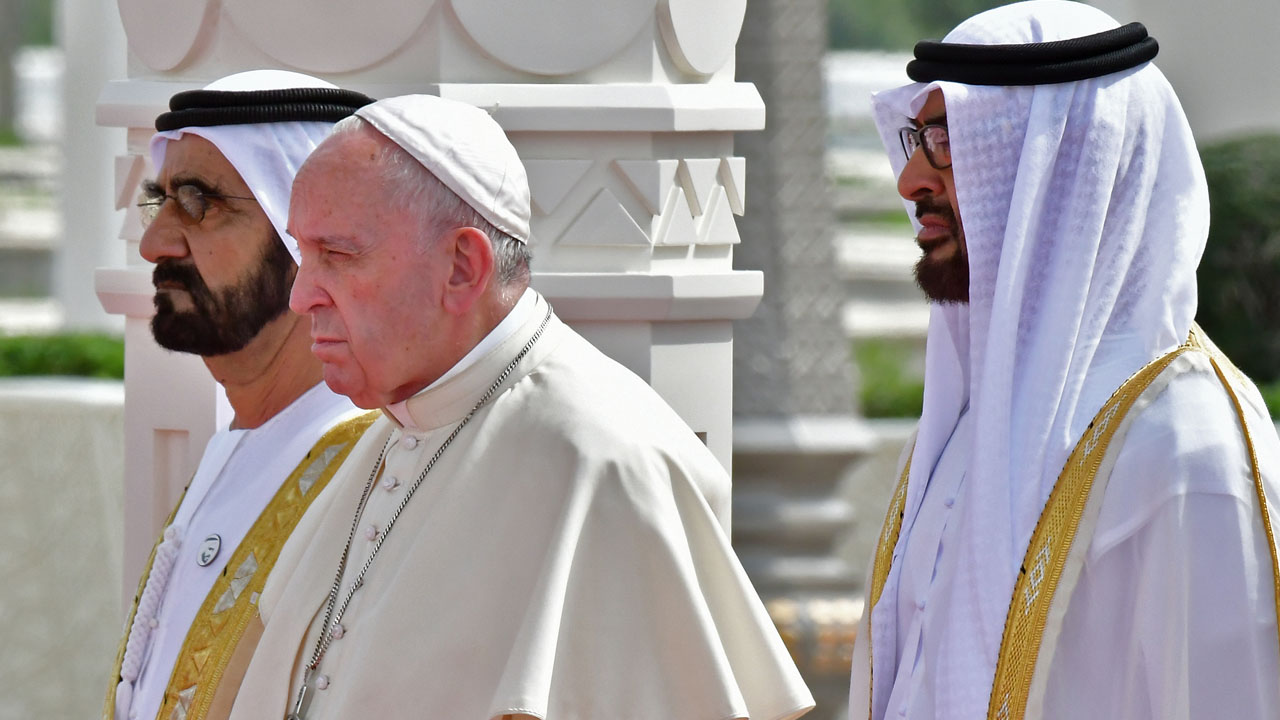 Pope Francis (C) is welcomed by Dubai ruler Sheikh Mohammed bin Rashid Al-Maktoum (L) and Abu Dhabi’s Crown Prince Mohammed bin Zayed al-Nahyan (R) upon his arrival to the presidential palace in the UAE capital Abu Dhabi on February 4, 2019. – Pope Francis arrived in the UAE on February 3, the first ever papal visit to the Arabian Peninsula, birthplace of Islam, where he will meet leading Muslim clerics and hold an open-air mass for some 135,000 Catholics. (Photo by Giuseppe CACACE / AFP)

Pope Francis, the first leader of the world’s 1.3 billion Catholics to visit the Arabian Peninsula, will attend an interfaith meeting in the UAE on Monday as part of his outreach to Muslims.

The pope’s highly publicised 48-hour visit to the United Arab Emirates will also include an open-air mass on Tuesday for 135,000 of the Muslim country’s million Catholic residents.

The pontiff, who made history when he touched down in Abu Dhabi on Sunday night, said he came “as a brother, in order to write a page of dialogue together, and to travel paths of peace together”.

The pope is expected to raise the issue of Yemen, devastated by a war in which the UAE is a key player, with Abu Dhabi’s Crown Prince Mohammed bin Zayed.

Yemen is home to what the UN calls the world’s worst humanitarian crisis, triggered by the intervention of Saudi Arabia, the UAE and their allies in a war between the government and Huthi rebels.

The emirate’s crown prince was also at the airport to greet the pontiff, who has made strengthening ties between Christianity and Islam a cornerstone of his papacy.

Hours before he flies back to Rome on Tuesday, the pope will lead a mass in a stadium in the capital, which local media say will be the largest public gathering ever in the UAE.

The UAE has dubbed 2019 its “year of tolerance”, but rights groups have criticised the country for its role in Yemen, where an estimated 10,000 people have been killed since the Saudi-led alliance including the UAE joined the government’s fight against the Huthis in 2015.

Rights groups, which have slammed the UAE over its intolerance of dissent, have also urged the pope to raise the issue of Ahmed Mansoor, an Emirati activist serving a 10-year prison term.

Pope addresses Yemen war
Before heading to the Gulf on Sunday, Pope Francis urged warring parties in Yemen to respect a truce agreement and allow deliveries of food aid.

“The population is exhausted by the lengthy conflict and a great many children are suffering from hunger, but cannot access food depots,” he said.

“The cry of these children and their parents rises up to God.”

The pope and his host Sheikh Mohammed are also expected to discuss “terrorism” and violence.

The UAE, which prides itself on its religious tolerance and cultural diversity, is a member of the US-led coalition battling the Islamic State group in both Syria and Iraq.

The UAE has eight Catholic churches. Oman, Kuwait and Yemen each have four.

Qatar and Bahrain have one each, while ultra-conservative Sunni powerhouse Saudi Arabia bans all non-Muslim places of worship.

Muslims make up nearly four fifths of the UAE’s population, but the country is also home to nearly a million Catholics, according to the Apostolic Vicariate of Southern Arabia.

Migrants from Asian countries make up about 65 percent of the population.