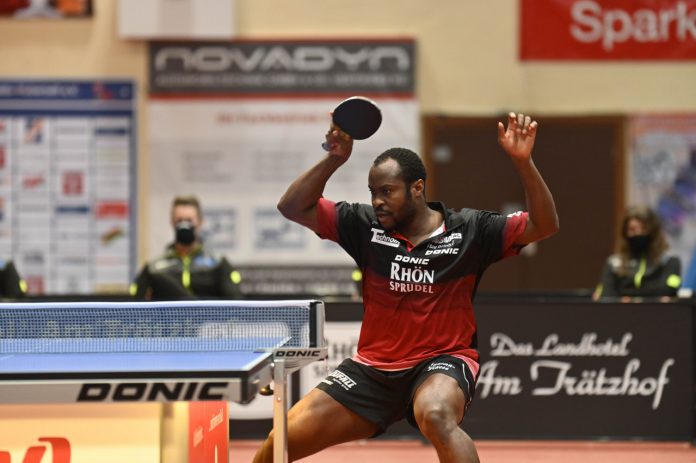 Quadri Aruna in action at WTTC in Houston, Texas on Wednesday November 25, 2021…
Nigeria’s Quadri Aruna is the only African listed among the top 20 ranked male players in the world that will take part in the maiden World Table Tennis (WTT) Cup Finals scheduled for December 4 to 7 in Singapore.

According to the organisers, the Nigerian made the cut for the $600,000 prize money championships based on his November 2021 rating to be part of the first-ever WTT Cup Finals.

Singapore will make history as the city plays host to the first-ever WTT Cup Finals organised by WTT and the prestigious new event will see some of the world’s best men’s and women’s singles players battle it out to be crowned season-ending champions.

Qualification for the WTT Cup Finals is based on the ITTF Table Tennis World Rankings published on November 16, 2021, with no National Entry Restriction applied.

However, due to the ongoing challenges presented by the COVID-19 pandemic, this year’s WTT Cup Finals Singapore will consist of a combined event featuring men’s and women’s 16-player singles draws only.

The players will share a prize pool of $600,000 – with men and women players being awarded equal prize money.

“The table tennis community and Singapore share a special bond and we are delighted that Singapore becomes the first-ever host of the WTT Cup Finals,” said ITTF Group CEO and WTT Director Steve Dainton. “We are grateful for the support of Sports Singapore which have collaborated closely with us over the past weeks to be able to bring this event to life. We are looking forward to further strengthening our partnership with the Lion City and to continuing hosting world-class events there.”

“We are honoured to be the host city for the inaugural WTT Cup Finals. Staging the event in Singapore signals our commitment to bring sport back safely for everyone. The WTT Cup Finals is an excellent opportunity to enliven our local table tennis community and inspire more young athletes to engage in the sport”, said Sport Singapore CEO, Lim Teck Yin.

“We are so excited that the WTT Cup Finals is coming to Singapore. I know that our Singapore table tennis fans are already looking forward to seeing top class players in action. This is the first time that Singapore is hosting the WTT Cup Finals and STTA will lend our support to making the tournament a success”, said Ms Ellen Lee, JP, PBM, STTA President.
Facebook
Twitter
Instagram
YouTube
Website
About ITTF-Africa
The ITTF-Africa (Africa Table Tennis Federation) is responsible for the sport of table tennis within the African continent. ITTF-Africa has 54 affiliated National Associations.

Find out more about the ITTF-Africa (Africa Table Tennis Federation) at ITTFAfrica.com.