Pastor Enoch Adeboye, General Overseer (GO) of the Redeemed Christian Church of God (RCCG) has donated equipment worth over N70 million to the Intensive Care Unit (ICU) of the Plateau Hospital, Jos.

Inaugurating the equipment at the renovated ICU center, Adeboye said that the gesture was to facilitate quality healthcare delivery to the people in plateau and the North central at large. 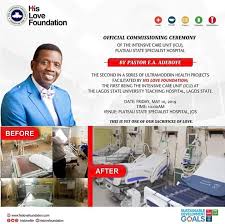 Earlier, Pastor Sunday Akande, the Special Assistant to the G.O on Technical Matters, said that Plateau was chosen because it was central to other states in the region.

Akande said the donation was part of the ministry’s Christian Social Responsibility (CSR) adding that the Church had 158,000 such projects all over Nigeria.

Akande appealed to the management of the hospital to ensure that the center and equipment were well maintained.

Speaking at the ceremony, Gov. Simon Lalong of Plateau, commended the gesture and said that the hospital was now better equipped to respond to emergencies.

Lalong noted that many families would now be saved from the agony of unnecessary deaths caused by inadequate medical attention and equipment.

The governor, who was represented by his Deputy, Mr Sonni Tyoden, said that the gesture was the biggest private sector-based intervention to the hospital in recent times.

He said his administration was committed to enhancing the health needs of the people as encapsulated in its policy thrust.

According to him, an executive bill has been transmitted to the Plateau House of Assembly, aimed at upgrading the hospital to a Specialist hospital with all the benefits that come with it.

Lalong also reiterated his administration’s commitment to fulfilling its promises to replace obsolete equipment in the hospital; as well as purchase new ones to meet the health needs of its citizens.