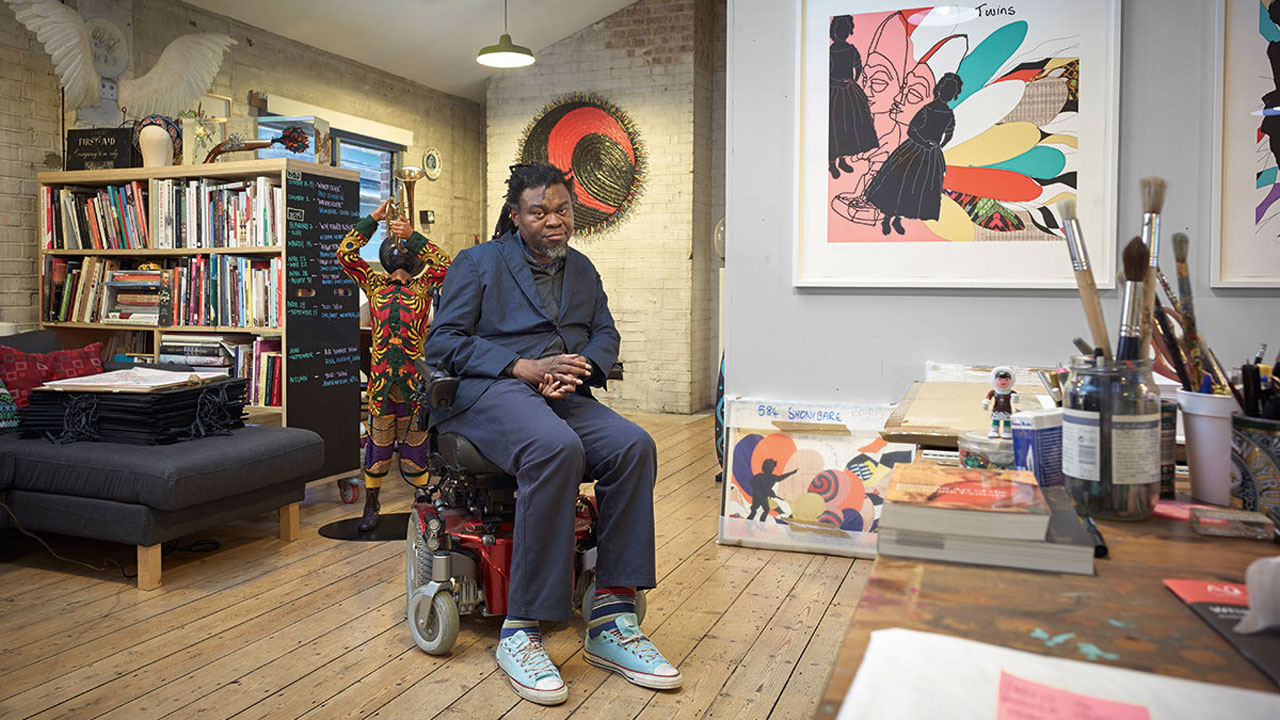 From the entrance, as you crossed into the park, you would see it. What would have drawn you to it were the bright colours and the way it is shaped like an ankara wrapper fluttering in the wind. From its pride of place in the park it commanded attention and many were moved to ask what it was. For the three months it was there, this was the story of the sculpture at Ndubuisi Kanu Park, Lagos.

A brief enquiry would have availed you of the apt, sounding name: Wind Sculpture. Further enquiries would then reveal that the thing of beauty was created by famed artist, Sir Yinka Shonibare. What the enquiry may not tell you is that Shonibare is a Briton (yeah, you probably already know he has Nigerian roots from his name), who has made a name for himself as an artist, one who wasn’t held back from pursuing his dreams by the disability that keeps him wheelchair-bound.

Disabled at 18 after he contracted transverse myelitis, an inflammation of the spinal cord, the artist went on to study fine art, first at Byam Shaw School of Art (now Central Saint Martins College of Art and Design) and then at Goldsmiths University of London, where he received his MFA, graduating as part of the Young British Artists generation.

I hadn’t heard of Yinka Shonibare the day I went to witness the installation of his sculpture in Alausa, Lagos, but watching the workmen use a crane to gingerly ease out a wrapped package, I knew without asking that what it held is super precious.

The next day I was at Ndubuisi Park Lagos, when Shonibare unveiled the sculpture. It was November 17, 2016, and the searing heat of a late afternoon sun didn’t dampen the sense that history was being made, as this sculpture, a colourful fibreglass and steel installation that reminds one of wings in flight, was the first-ever outdoor sculpture in Nigeria by the artist.

I would later learn that the artistic masterpiece was produced through collaboration between the artist and Stephen Friedman Gallery, with the support of Guaranty Trust Bank.

Shonibare’s sculpture was showcased as part of the U.K./NG project of British Council Nigeria and is an example of how British Council collaborates with artists to create capacity in the creative industry in Nigeria. The idea is to contribute to the development of Nigerian creative industries by exchanging and showcasing quality Nigerian and British artistic content, as well as providing skills training.

“The importance of such an exchange can never be underestimated, as it forms the basis for our mutual peace and prosperity through art,” Shonibare said of the project.
Information on British Council Nigeria website shows that more than 400 people visited Wind Sculpture VI in the opening weekend, where Shonibare held a series of talks and workshops with local students. Aside the sculpture, Shonibare also outlined details of his plan to support young artists in their professional development through training via a school he is establishing, revealing that he has acquired land for this purpose already. As such, we should be seeing his influence in the Nigerian art scene in the near future.

Wind Sculpture VI has returned to the U.K., but it is a bet that its image is imprinted in the minds of the over 115,075 people that visited it over two months. Even now, it is hard to drive by Ndubuisi Kanu Park without reminiscing on the colourful sculpture that seemed to flap in the Lagos wind.

Shonibare’s Wind Sculpture VI was part of the U.K./Nigeria 2015–16 season, which was a major season of arts in Nigeria, aimed at building new audiences, creating new collaborations and strengthening relationships between the U.K. and Nigeria by British Council Nigeria.