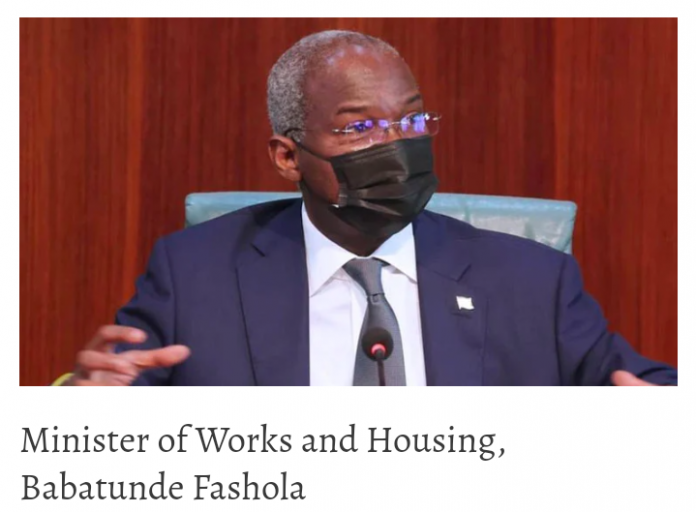 The Senate on Tuesday expressed its determination to detach the budget of the Federal Roads Maintenance Agency from the annual fiscal estimates of the Federal Ministry of Works and Housing.

The Minister of Works and Housing, Mr. Babatunde Fashola (SAN), however expressed some reservations on the implications of such moves.

He also explained that a Federal Government circular issued early in the year, stalled the implementation of projects contained in the 2021 budget.

The Senate Committee on FERMA, made the request known to the Minister and officials of the road maintenance agency when during a budget session at the National Assembly.

The Chairman of the Committee, Senator Gershom Bassey, said the Senate was desirous to have a separate envelope system for FERMA, independent of the Ministry of Works.

Bassey said, “We have observed that FERMA is a semi independent agency. We are thinking of bringing out the budget of FERMA from the ministry’s envelope so the agency will deal with its own finance.

“We think it is a better way to go. So that we don’t have to be summoning the ministry each time we want to have engagement with FERMA.

We want to know the criteria that you used to allocate funds from your ministry’s envelope to FERMA.

The minister noted the request of the lawmakers but explained that the arrangement should not affect the funding of the main ministry.

Fashola said, “I understand and align with the necessity and purpose of setting up parastatals. They are crucial for the implementation of government policies.

“I believe that in the process and speed to create FERMA, we left certain things behind. It is important to look at those things here. One of the things we left behind was the institutional capacities in the ministries.

“For instance in the old federal roads camps that we were using to provide assessment and maintenance for FERMA, we left the federal controllers of works out and they are still there in all the states.

“FERMA and other agencies under ministry’s supervision, will confirm that I don’t interfere with their affairs.

On the reason for the delay in the FERMA’s procurement plans for 2021, Fashola said it was caused by a federal government circular which delayed the implementation of the capital components of the 2021 budget.

Why Most Women Are Cheats – Joro Olumofin

Petrol To Sell For N340 Per Litre Next Year -Kyari

‘It Is A Scam’ – NCC Warns Nigerians Against Davido Airtime, Data Giveaway