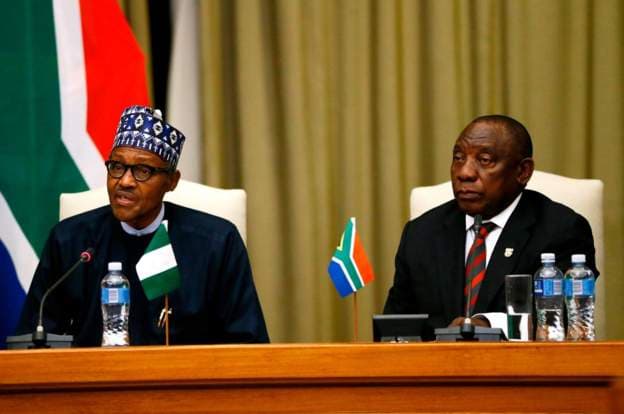 Ramaphosa arrived Nigeria on Wednesday morning and headed to Aso Rock where he was welcomed by President Muhammadu Buhari.

The South African leader, who is on a three-day working visit, inspected a guard of honour and received a 21-gun salute.

The visit comes at a time when many countries are shutting their doors to South Africa over the Omicron variant of COVID-19.

South Africa is the first country that reported the new strain of the virus.

The action against South Africa over the variant had triggered a backlash.

President of the African Development Bank (AfDB), Dr. Akinwumi Adesina, had voiced displeasure over the “stigmatisation and penalisation” of Africa for new COVID-19 variants discovered on the continent.

The AfDB president, who wrote on his Twitter handle, stressed that Africa was not the source of the COVID-19 virus, which had continued to put the world on edge.

On Tuesday, Dutch health authorities said Omicron variant was present in the Netherlands earlier than previously thought, and before South Africa had first reported the new strain of COVID.

Netherland made the clarification after the widespread belief that the first Omicron cases in the country were from the cluster of 14 passengers on two flights from South African flights that arrived in Amsterdam on Friday.

Nigeria detected three cases of Omicron hours before the arrival of Ramaphosa.

The Nigeria Centre for Disease Control (NCDC) said among the cases were two persons who travelled from South Africa last week.