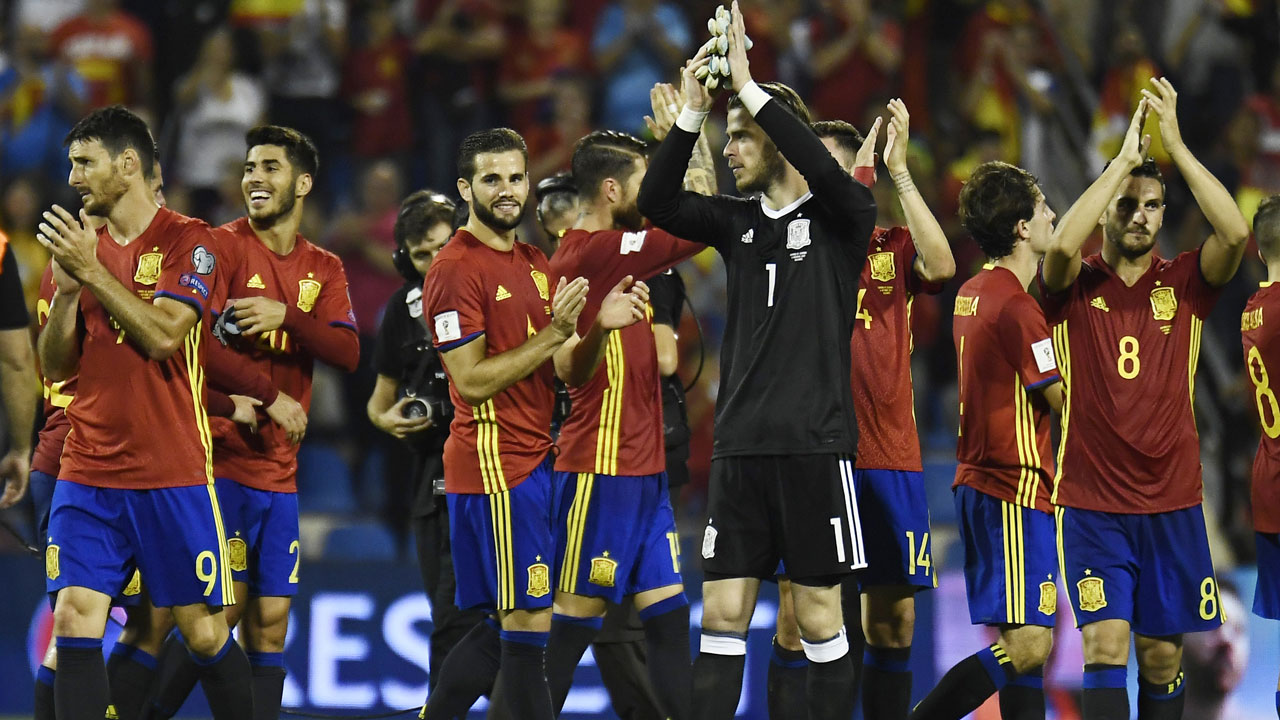 Spain team applaud at the end of the World Cup 2018 qualifier football match Spain vs Albania at the Jose Rico Perez stadium in Alicante on October 6, 2017. JOSE JORDAN / AFP

Spain sealed their place in next year’s World Cup by routing Albania 3-0 on Friday in a match laced with political tension amidst Catalonia’s drive for independence and blighted by more jeers for Gerard Pique.

Pique made his 92nd appearance at international level just days after voting in a referendum on Catalan independence deemed illegal by the Spanish government and marred by a police crackdown that left hundreds needing medical attention.

However, the outspoken Barcelona defender and his teammates put the distractions of a turbulent week behind them to continue their sensational form since Julien Lopetegui took charge thanks to goals from Rodrigo, Isco and Thiago Alcantara.

“I think it is time to start focusing on positive news in football and in the country because there are very good things”, said Lopetegui.

“I think sport and the behaviour of the boys this week leads the way to show what we are and what we can be as a team. Sport is a good example.”

Victory opened up a five-point gap on Italy atop Group G of European qualifying with just one qualifier remaining after the Azzurri were held 1-1 at home by Macedonia.

“We did our bit which was to win the game and the Italy result qualifies us mathematically,” added Lopetegui.

“The best (part of qualifying) has been the commitment, enthusiasm, desire, humility and passion of the players since I arrived.”

As has been common for the last two years when representing Spain, Pique was met with a mixture of jeers and applause as many have taken as much offence at his outspoken jibes at rivals Real Madrid as his political stance.

Along with captain Sergio Ramos and Barca teammate Andres Iniesta, Pique has called for politicians on both sides of the political divide to negotiate in order to avoid the shocking scenes of violence that reverberated around the world last weekend.

“To me Gerard is calm, the relationship between him and the rest is one of respect,” said Rodrigo. “He is a very important player for this national team.”

‘Painful subject’
However, some fans were less forgiving of Pique’s decision to continue criticising the heavy-handed policing after joining up with the Spain squad this week on social media.

“In Las Rozas (Spain’s training ground) you no longer wear the Barca shirt, but that of the national team, of the country you belong to and you retweet things against that country,” said Nacho Ortiz, 23, draped in a Spanish flag outside the ground who admitted he would jeer Pique before the game.

“It is a painful subject,” said Ortiz’s friend Adrian Pena.

Pique has campaigned for Catalonia’s right to self-determination but has never publicly backed independence for the wealthy northeastern region of Spain.

“My personal opinion is that Pique hasn’t said he is in favour of independence. He has asked for dialogue, that there is a binding referendum,” said Sofia Duperiel, an Alicante native who came to watch the game with her six-year-old son.

A 25,000 strong crowd at the Estadio Jose Rico Perez in Alicante were soon rejoicing in cries of “I am Spanish” and “Viva Espana” (long live Spain) as the hosts raced into a 3-0 lead inside 27 minutes.

Valencia striker Rodrigo opened the scoring by firing a rising drive into the top corner from Isco’s fine through ball.

Isco then found the net himself by smashing high past Etrit Berisha before Thiago powered home a header from another debutant Alvaro Odriozola’s pinpoint cross to round off a stunning three-goal blast in 11 minutes.

Pique continued to attract attention after the break as he firstly picked up a yellow card that will see him miss Spain’s final qualifier against Israel on Monday through suspension.

And he then applauded the crowd as he was replaced by Nacho to a combination of whistles from some and a standing ovation from others.

“For sure it spoils the party,” added Duperiel. “It is a shame to mix politics and sport.”