Cedric Shivonje Isaac, who is being held in prison for an unrelated crime, has told Kenya’s leading newspaper, the Daily Nation, that Sky News used pictures from his Facebook page to erroneously identify him as Paul Manyasi. 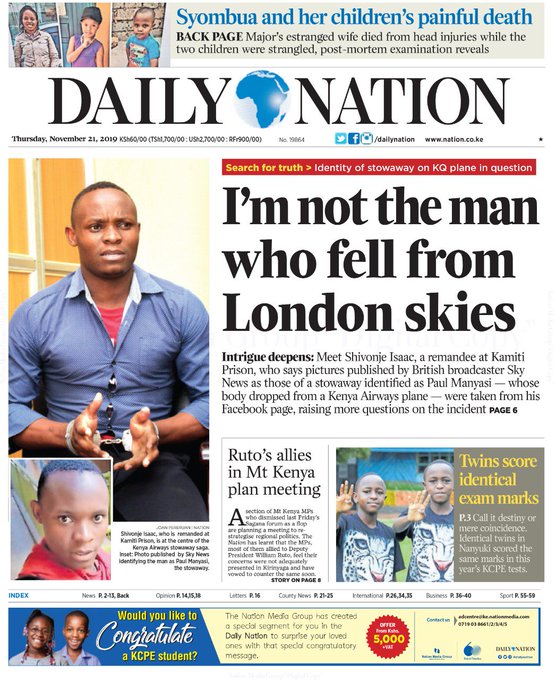 Prison authorities told the BBC last week that the man shown in the photos used by Sky News was actually Cedric Shivonje Isaac, and has been in their custody for three months.

Kenya’s government spokesman Cyrus Oguna told the BBC that the Sky News report was not correct.

“This is an open investigations and I can say the report is what you call fake news. The family of Cedric [Shivonje] hasn’t been barred or refused access to him. You can see this is clearly someone different. So let our investigative arms do their job,” said Col Oguna.

Sky News reported that the stowaway worked as a cleaner for a private company at the country’s main airport in the capital, Nairobi, a claim that was backed up by a woman who identified herself as Mr Manyasi’s girlfriend and colleague.

Both the Kenya Airports Authority (KAA) and Colnet, the cleaning company which Mr Manyasi was said to have worked for, have issued statements saying they are not aware of anyone by that name, and in particular that a security pass has never been issued to a Paul Manyasi.

“The Greatest Artist God Ever Created Is Now Working For Him”...

20-Year-Old Wife Finally Reveals Why She Cut Off Her Husband’s Manhood...