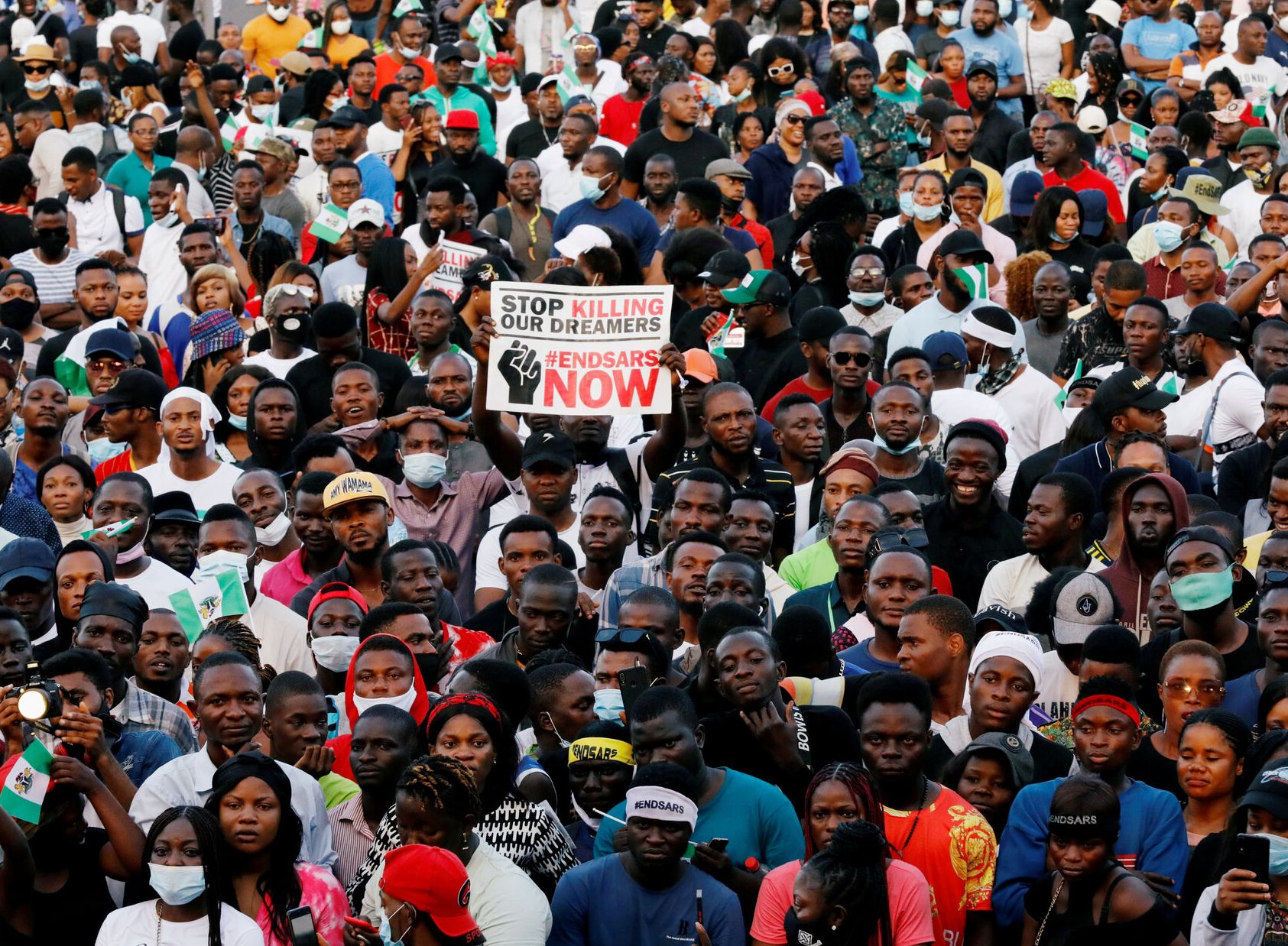 The #EndSARS movement — which actually started a few years before the 2020 protest — went into full swing from October 7, 2020 with demonstrations across major cities in the country.

According to The Cable, the protests gained widespread acceptance both on the streets and on social media as celebrities added their voices in support of the movement.

On October 11, 2020, Adamu Mohammed, the former inspector-general of police, announced the disbandment of SARS, and on the same day, the protesters presented a five-point demand to the federal government.Advertisement

However, despite the disbandment of SARS, the protests continued and was later hijacked by hoodlums.

In the days between October 9 and October 22, 2020, while peaceful demonstrations continued in parts of the country, violent attacks were unleashed on protesters, passers-by, security agents, motorists, among other categories of persons. Private and public facilities — including police stations, courts, prisons and media houses — across the country were also vandalised by hoodlums.

The development led to a declaration of curfew by some state governments in a bid to curtail the violence.

Following the protests, hundreds of arrests were made but there were declarations by government officials in some states for several persons to be released.

However, some persons remained in custody for various categories of offences linked to the protests.

In June, there were reports that Kemisola Ogunniyi, an 18-year-old lady who was arrested in October 2020 in Ondo, gave birth at the Surulere prison in the state.

She was said to have been arrested by soldiers for allegedly participating in the setting ablaze of the All Progressives Congress (APC) secretariat in Akure, the state capital. She and others were subsequently charged with conspiracy to commit arson, stealing and malicious damage.Advertisement

A few days after the story went viral, Ogunniyi regained her freedom, after being granted bail.

Ogunniyi’s experience brings to the fore the cases of some persons who are still in custody over their alleged involvement in offences relating to the protest.

Kpanou, a Beninese, was said to have been arrested on October 22, 2020 by officers attached to Marako police station, while he was returning home from work.Advertisement

He was arrested after being accused of stealing items from a looted supermarket nearby. He was taken to the Area A command on Lagos island and arraigned at the Yaba magistrate’s court on November 3, 2020.

At the magistrate’s court, he was remanded in Kirikiri prison while awaiting the advice of the Lagos state director of public prosecution.

On September 24, Kpanou appeared before the Yaba magistrate court, but the magistrate was absent. The case was consequently moved to December 17.

In November 2020, Adesina Ademuyiwa was said to have been arrested in his Ibadan residence in Oyo state, for allegedly participating in the violence that trailed the #EndSARS protests.Since his arrest, Adekemi Adesina, the suspect’s sister, has been using social media to demand justice for her brother.

Others being tried alongside Ademuyiwa are Ikechukwu Eze, Ariyo Afeez, Taoreed Abiodun, Adekunle Moruf, Rasheed Tiamiyu, Ariyo Sodiq, Oyewole Olumide, and Ikenna Amaechi.The suspects, who were arraigned in July 2021, have pleaded not guilty to the five-count charge bordering on alleged murder, arson and theft.

Speaking to TheCable on the development, Adekemi said the suspects have remained in custody since they were arrested, while the case was not heard in court at the last sitting on September 27.According to her, she was told that the case has been transferred to another judge.

On December 22, 2020, Okoro, a commercial driver, was arrested for his alleged involvement in the vandalism of the Orile police station in Lagos.He was said to have been spotted in the background of a picture depicting hoodlums destroying the police station.

Festus Ogun, counsel representing Okoro, told TheCable that after a series of court appearances, the driver was granted bail.

According to the lawyer, Okoro’s wife has not been able to meet the bail conditions which include three sureties with tax clearance in the past three years.

The driver is also said to be the breadwinner of the family.The suspect is still in Kirikiri prison — 10 months after his arrest — and the next court sitting on the case is December 8.