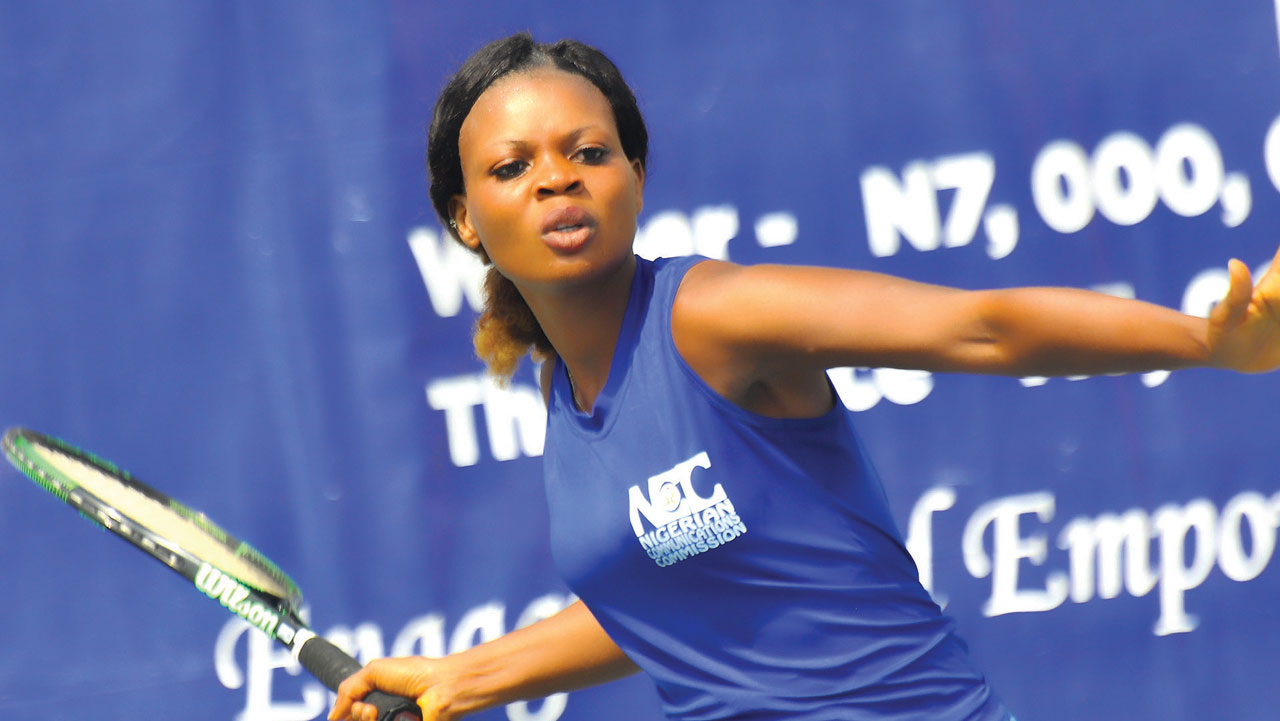 Ronke Akingbade of Team Muller was one of the architects of Team Mullers’ victory over VGC Lions at the on-going NCC Tennis League in Lagos…at the weekend.

Lagos-based Team Muller scored a perfect five as they beat Team Oluyole of Ibadan 4-3 in the final round robin match of the Blue Group, which took place at the National Stadium Surulere over the weekend.

Team Civil Defence also snatched the second semifinal spot from the group when they edged a vastly improved Kalotari team in Port Harcourt 4-3.

With both Team Civil Defence and Team Kalotari tied at three points each, behind Team Muller with four points, the Port Harcourt tie was a high-stake, winner-takes-all contest.

Team Kalatori fought back, winning the men’s doubles (Paul/Iloputa beat Enosorogbe/Nonso Madueke 6-1, 0-6, 10-6)  and the first reverse singles (Paul beat Babalola 6-3, 6-3) to narrow the scores to 2-3, but Enosorogbe was able to weather a brave and determined performance from Iloputa in the sixth rubber – prevailing 6-4, 6-4 against an opponent, who played to the end despite suffering serious muscle cramps in the second set.

The pair of Mcleod and Paul compensated the home fans by taking the mixed doubles against Bukola Olowu and Michael Chima 6-3, 6-3.

The third round robin tie in the group took place at the VGC Sports Club in Lekki, Lagos, where the Ilorin-based Team Optiweb overran hosts, Team VGC Lions 7-0.

With the ties concluded in the Blue Group, Team Muller topped the table with five points followed by Team Civil Defence on four points and Team Kalotari on three points in second and third places respectively.

Team Optiweb with two points occupies the fourth position, while Team VGC Lions with a point is in fifth place. Team Oluyole with no points despite a determined performance in their last tie against the group leaders ended up in the sixth position.

The round robin ties will be concluded this weekend with the last White Group matches in Abuja, Kaduna and Jos. Defending champions, Team Offikwu are already secured one semifinal spot. The second semifinal spot will depend on the outcome of the tie between Team Ndoma Egba and Team Goshen in Abuja this weekend.

The NCC Tennis League is offering a consolidated price money of N23 million and has taken topflight tennis to 12 different cities in Nigeria.