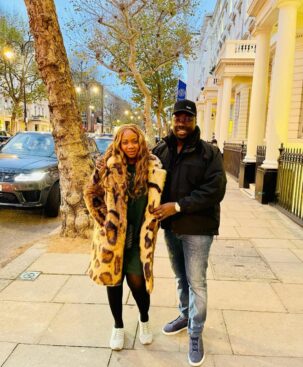 Obi Iyiegbu popularly known as Obi Cubana a businessman and socialite has stated that this year still remains his best year despite the challenges he experienced.

He was released after a few days in custody.

Shortly after, Hustle and Bustle, his club in the nation’s capital, was shut following the electrocution of a client.

Sharing loved up photos of himself and his wife during vacation abroad, he wrote, “Despite the challenges of November, 2021 remains our best year EVER!

“May December and the rest of the year 2021 multiply our blessings, Amen.

Obi Cubana shot into national limelight when he buried his mother in Oba, Anambra state, in July 2021.

The burial became the talk of the town as money was lavishly spent by his friends, and Nigerian celebrities with viral videos on the internet.

Below are pictures of the ongoing vacation with his wife abroad: