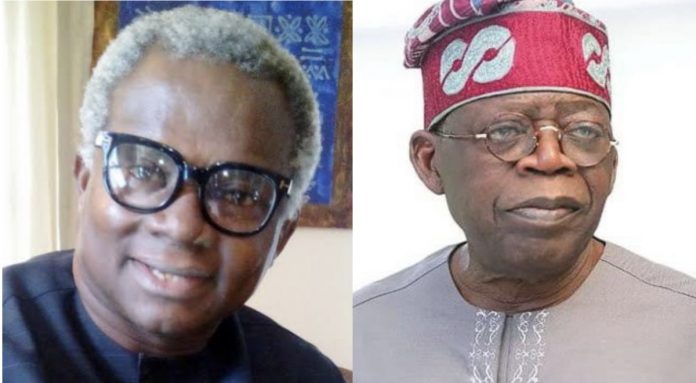 Former Lagos governor Bola Tinubu should jettison his touted presidential ambition to support a younger candidate from the South-East, Osita Okechukwu, a Chieftain of the All Progressives Congress, APC, has advised.

Mr Okechukwu, also the Director-General, Voice of Nigeria (VON), gave the advice in a statement at the 2021 Eke Day in Abuja. He said Mr Tinubu should rather be a kingmaker, given his standing in the party.

“If I am consulted by our national leader, His Excellency, Asiwaju Bola Ahmed Tinubu, on whether he should run or not for the exalted office of the President of Nigeria in 2023, my candid advice will be that he should use his abundant Almighty God’s endowment to unite the APC, and unite the South and by extension our beloved country, by backing a candidate from the South East,” he said.

Last week, Mr Tinubu said he was biding his time before publicly declaring his intention to run for president in 2023 because he didn’t want to distract President Muhammadu Buhari. He, however, said he would not refuse people urging him to contest for the high office.

Mr Okechukwu said by throwing his weight behind a younger person from the South, especially the South-East geopolitical zone, to emerge as the country’s next president in 2023, Mr Tinubu would have united the south forever.

The VON boss added that if Mr Tinubu widens his search, he would definitely find a credible candidate from the South-East who would easily defeat the presumed candidate of the Peoples Democratic Party (PDP), former Vice President Atiku Abubakar.

According to Mr Okechukwu, by doing so Mr Tinubu would have wittingly used one stone to kill two birds, unite the APC, and unite the South and by extension, the entire country.

He emphasised that it would be statesmanlike for Mr Tinubu to be a kingmaker instead of “throwing his hat into the ring”.

He said Mr Tinubu would have his name written in gold if he utilised his God’s endowed resources to support anyone from the South-East to be Nigeria’s next president of Igbo extraction, against any other person because of the zoning arrangement.

“The rotation started from the South-West in 1999 and therefore, going by equity and natural justice, the South-East should be allowed to produce the country’s next president in 2023.

“The zoning convention has governed the 4th Republic since 1999, a convention which states that the president should rotate between North and South.

“It started in 1999 from the South-West, with Chief Olusegun Obasanjo as president, secondly, our brothers in the South-South had their turn to preside over Nigeria.

“South-East is the only geopolitical zone in the South which had not presided over Nigeria, except the six months of General Aguiyi Ironsi’s stint,” Mr Okechukwu said.