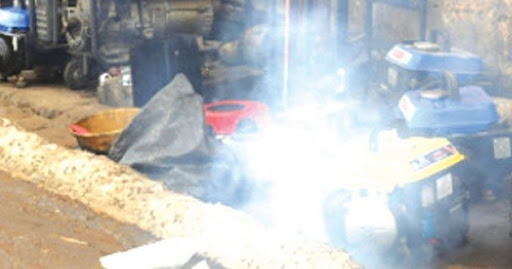 Two persons have lost their lives after allegedly inhaling fumes from a generator in a guest house in Elele Alimini, in the Emuoha Local Government Area of Rivers State.

The generator was left in a passage into the guesthouse overnight by the manager of the facility.

The hotel manager and a male guest died in the incident.

A lady, who was unconscious, was reportedly rushed to a hospital where she was resuscitated.

An indigene of the community, who confirmed the incident, said the facility had been shut down, while autopsies were being conducted on the two corpses.

The indigene, who identified himself as Benson, said, “The police came and sealed the place. The bodies have been taken for autopsies.”

Benson noted that the owner of the guest house had been invited by the police.

He said, “What we heard that happened at the hotel was that the manager put on a generator inside the passage of the hotel and they all slept off.

“In the morning, people woke up and saw that everywhere was filled with smoke. They discovered that two people were dead; the manager himself and another man that lodged there.

“I think one other lady was unconscious; but she was later revived at the hospital.”

The state Police Public Relations Officer, Nnamdi Omoni, confirmed the incident to our correspondent, adding that investigation was ongoing.