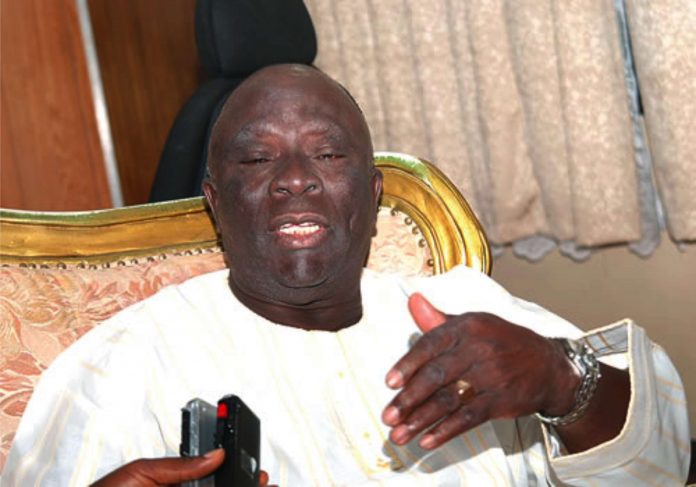 Chief Bisi Akande, former governor of Osun state and former National Chairman of All Progressives Congress, APC, and Chief Ayo Adebanjo, leader of pan-Yoruba socio-political group, Afenifere are both leading lights of Yoruba ethnic race. Alongside other Yoruba activists, they’ve been in the forefront in the struggle to have a better deal for their people, though they may not belong to the same group. A verbal war has however ensued between the two elder statesmen.

Last week, Chief Akande stirred the hornets nest at the launch of his autobiography, “My Participations,” where he accused Chief Adebanjo of pestering Senator Bola Tinubu to build a house for him in Lekki where he now resides. In his response, Chief Adebanjo denied that his Lekki house was built for him by Tinubu and went to a great length explaining how he sourced for funds to build the house. He nevertheless challenged Chief Akande to explain the sources of his own wealth and asked the Economic and Financial Crimes Commission, EFCC, to probe him. Following the verbal war, concerns have been expressed in some quarters that the Yoruba people may be the loser in the end.

In his reaction, Nigeria’s former Ambassador to the Philippines, Dr Yemi Farounbi said, “Chief Adebanjo holds the view that there ought to be restructuring before election and that is what he has been saying over and over.

As to the disagreement between him and Chief Bisi Akande, I personally hold that it was an unnecessary diversion from the focus of what we should pursue. Of course there will be no reaction without an action, I hold the view that both the action and the reaction are unnecessary in the face of what Nigerians are facing, in the face of what the Yoruba are facing and in the pursuit of what the Yoruba would like to see.

It will in some way, affect whatever happens, because we are not likely to get a unanimous view of the hope and expectations of Yoruba. Already, cases of disaffection, bad blood have been sown and I don’t see how that will not affect whatever it is the Yoruba want to get. In my view, the whole situation is unfortunate, it is unnecessary in the circumstances we all are.

Also reacting, the Secretary-General, Yoruba Council of Elders, Dr Kunle Olajide told Vanguard that YCE would wade in and prevent unnecessary escalation of the verbal war between the two elder statesmen.  Olajide said, “Our duty, as Yoruba elders is to douse the tension, to diffuse all these mudslinging because these are our fathers and washing their dirty linen in the public is not the best for us. I can assure you, we will bring the matter to an end very soon, within the shortest possible time. We are going to bring the two of them together once again. We must ensure that we bring them together and put the past behind them right away, because failure to do that might have adverse effect on our aspiration”.

According to him, “they are fighting over their personal interests that are not not in the interest of Yoruba nation. I want to tell you, their fight has nothing to do with having a common front for Yoruba agenda. Yoruba are happier in a truly federal republic. They are entitled to their personal opinions and interpretation of events, that does not mean they are against Yoruba agenda or that they oppose it. Nothing changes Yoruba agenda and efforts are on to resolve these differences.

“We can’t allow any personal interest to override the Yoruba agenda. The Yoruba race is about a hundred and fifty million people, scattered across the globe and they are very hospitable, very enterprising, very liberal and very accommodating. They don’t want to be cheated and don’t believe in cheating others. When you talk about the leadership of such people, a lot of factors must be taken into consideration. We are in a constitutional democracy now, where there is freedom of choice, freedom of association and freedom of speech. They are entitled to their personal opinions, which cannot hinder or prevent us from having a common front.”

The organizing secretary of Afenifere, Abagun Kole Omololu submitted that, “it is a great pain that baba Adebanjo has to issue a rejoinder to baba Akande. Akande wrote down history, which children yet unborn will read. Baba Adebanjo is still alive through the grace of God to clear his name, so that his grand children will not cover their faces in shame due to lies written down against their progenitor.

Pa Adebanjo has done the right thing. But baba Akande should have thought of the consequences of his actions on the entire Yoruba nation. Lately, most of the values we uphold dearly in Yoruba land have been bastardized through the action of our political leaders in government. Yoruba cherish good name, service to mankind, respect and affinity for values. The wealth of a nation is in its values. It’s very sad that baba Akande chose to destroy all our leading lights, for what purpose?

It is all about politics—Ilana Omo Oodua

Leader of Ilana Omo Oodua, Prof. Banji Akintoye through his Communication Manager, Maxwell Adeleye, however said, “it is about politics, it is between two politicians, it has nothing to do with the Yoruba cause. Baba Adebanjo was once the leader of Alliance for Democracy (AD) and he was with Tinubu. Things happened which led to the emergence of Action Congress (AC) and then to Action Congress of Nigeria (ACN) and eventually the All Progressives Congress (APC).