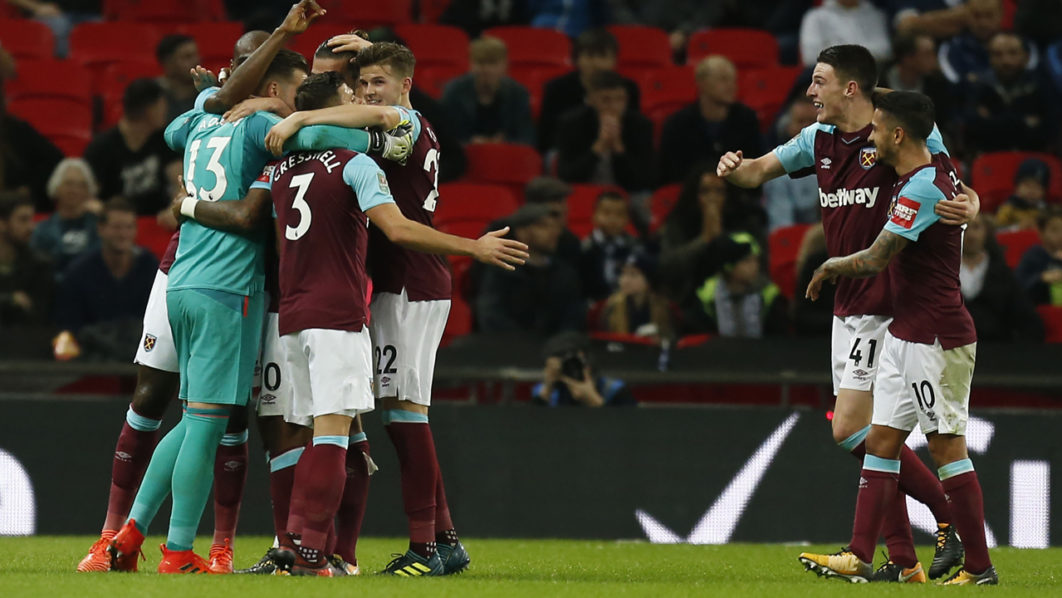 West Ham completed a stunning turnaround on Wednesday, roaring back from two goals down against Tottenham Hotspur to reach the League Cup quarter-finals while Chelsea saw off the challenge of Everton.

Slaven Bilic’s much-changed side were trailing 2-0 at the break after an insipid first-half display but a brace from Andre Ayew and a third from Angelo Ogbonna shocked the Wembley crowd and completed an astonishing comeback for the Premier League strugglers.

Spurs, who also made multiple changes, were quickly in control through an early goal from Moussa Sissoko, who strolled through the middle of the defence and stroked the ball past West Ham goalkeeper Adrian after a pass from Son Heung-Min.

They doubled their lead with about eight minutes remaining in the first half when Dele Alli curled the ball into the net via a deflection off the unfortunate Declan Rice, again following good work down the left from the impressive Son.

But the game came alive within 10 minutes of the re-start when Ayew pounced to poke home from close range after Spurs keeper Michel Vorm failed to hold a powerful Edimilson Fernandes shot from the edge of the area.

West Ham, who crashed 3-0 to Brighton in the Premier League on Friday, were level just five minutes later when Ayew applied the finishing touch to a cross by Manuel Lanzini and astonishingly took the lead when Ogbonna rose to head home Lanzini’s corner with 20 minutes to go.

“We could not wait for the game to start and I would hope the Brighton game was a one-off,” said Bilic. “We have composure, players back from injury and this is the standard of play (we expect).”

“I said I am calm and glad when we win in this way,” he added. “You see the team is very alive and we are very stubborn in a positive way. There is no time and place to go large now. We have done a lot, but considering the season, we have done nothing.”

Spurs made seven changes to the side that thumped Liverpool 4-1 at the weekend, leaving out the likes of Harry Kane and Christian Eriksen from the starting line-up while Cheikhou Kouyate and Lanzini were the only survivors for West Ham from their defeat to Brighton.

Disappointed Tottenham boss Mauricio Pochettino said his side showed a lack of aggression to concede three goals in 15 minutes.

“Maybe we thought the job was done,” he said. “The second half was not the same and it is difficult to accept.”