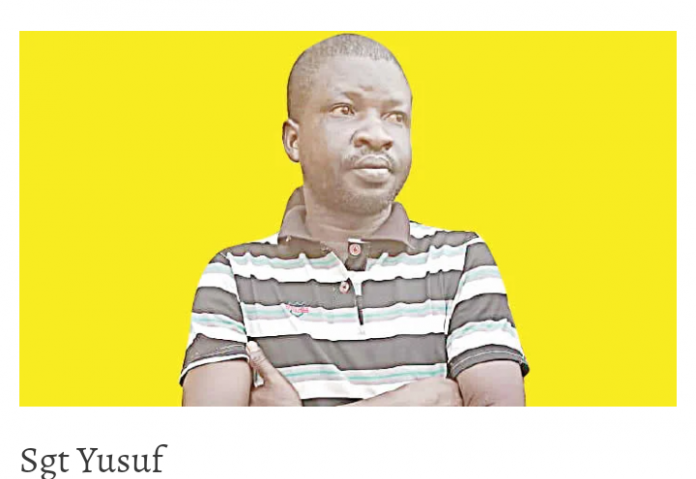 The Osun State Police Command recently paraded Sergeant Haruna Yusuf, attached to the traffic department of the Omu-Aran Division, Kwara State, for theft of firearm. The suspect tells BOLA BAMIGBOLA the story behind his arrest

What is your name?

My name is Haruna Yusuf. I am a traffic policeman, serving at the Kwara State Command. I am from Benue State. I joined the Nigeria Police Force on June 1, 2008. I am a sergeant.

You are a policeman, what then are you being paraded among suspects for?

On November 30, I was on special duty when I was arrested by the IRT (Intelligence Response Team). They took me to our station and from there, investigation into allegations against me started. The allegation has to do with the issue of a missing firearm (a pistol). I was dumped in a cell.

What is your connection with the missing firearm?

I found it (a pistol) behind a mosque in my division in Omu-Aran town. I decided not to tell my colleagues about it. I didn’t know what came over me. I eventually sold the firearm. I can’t explain what came over me at that time.

Who did you sell the gun to and for how much?

But the allegation against you is that you purposely stole the gun from one late Inspector Ehigimetor Ileso, causing him to be dismissed from the police because of his missing gun.

I didn’t steal the gun. I found it on the ground as I said earlier. It was later that I found out that the person that the gun was assigned to was in my division. I knew when they started looking for the gun but I was afraid to say that I found the gun.

I felt that if I confessed then, it would create a problem for me. The person I sold the gun to would also be in problem. I was scared and that was why I decided not to say anything.

You said you know the DJ as someone who deals in firearms. Does that mean that was not the first gun you sold to him?

I sold that gun and one locally-made revolver pistol.  I sold that one too.

Where did you get the revolver pistol from?

I attended the burial of someone from my tribe and at the ceremony, I met someone that told us that if we were interested we could get the revolver. The man said if I was interested, I could have it.

So, the person gifted you the gun?

No, I bought it from him. I looked into the offer, and with the insecurity in the country occasioned by killer herdsmen, I thought I needed personal protection. I signified intention to have the gun. I met the person that sold it to me at the burial. So I paid for the gun. I bought it for N25,000.

Why I Sold Colleague’s Missing Gun To DJ –Sgt Yusuf

Why I Didn’t Remarry – IBB