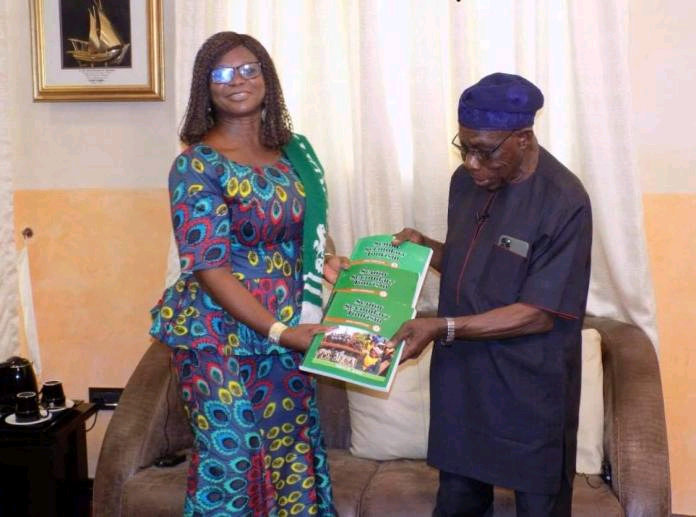 By virtue of the unique roles he has played in directing the destiny of Nigeria, Chief Olusegun Obasanjo can be described as a principal custodian of the country’s history, politics, culture and more. Like the proverbial eagle atop the roof, his eyes have seen the country’s cape and coast. That is why there is hardly any aspect of the country’s life that the Owu kingmaker cannot authoritatively speak about.

He did not disappoint this rating recently when he hosted tourism researcher, writer, presenter and promoter, Fidelia Salami. Salami, who is also the Chairman, Delta State Tourism Board in Delta State, has just unveiled a new platform called ‘Indulge Tourism’. With the project, she is set to prosecute tourism discourse and development and she was so ambitious and smart that she prospected Obasanjo as her first guest. And the two-time head of state of the Giant of Africa not only took her through efforts he made to open up the sector when he was in office, but he also highlighted what should be done to strengthen it.

For one, Obasanjo recalls, when he was military Head of State between 1976 and 79, he launched what ought to have eventually become the country’s tourism masterplan. This he did when he, according to him, released money to every state to develop a tourism overview/plan of its own domain. Obviously, nothing much was achieved by the states.

On how to move tourism forward in Nigeria, the former President explained that security must be alright because no one wants to visit a place where safety is not guaranteed. Besides, he adds, transport is key, saying efforts must be made to convince tourists that they could move freely to their places of choice. He also stressed the importance of good packaging.

”For me, the totality of the economy of a country or community must be handled in such a way that citizens or inhabitants can benefit from it. Tourism is a sector that should not be ignored. Hospitality is tourism; food, culture are tourism related. When you look at how these can serve the purpose of employment generation and wealth creation, you find out it is an area that cannot be ignored.

The Obasanjo Presidential Library, Abeokuta
“There is no place without tourism attraction. It depends on how you package it. Beautiful beaches, forests, rocks, rainforest areas, as you have in Cross River State, all are tourist attractions. When you get experts to package them and develop them, you reap benefits as tourism hosts. Some countries earn as much as 50 per cent of their revenues from tourism. So, there is no reason we should not pay attention to ours. Every state has what can be called tourist attraction. That they cannot take advantage of what they have is unfortunate.”

Obasanjo also seized the opportunity to highlight some of the tourist attractions in Abeokuta, the Ogun State capital. He noted that apart from a popular destination like the Olumo Rock, the likes of the Iwe Iroyin, which is the first newspaper in Nigeria; the adire fabric market, and early as well as new bridges, have historical and tourism components.

Salami’s first outing on ‘Indulge Tourism’, which is available on YouTube (the interview), surely commands a significat scrore. She has been able to tickle the legendary soldier and politician on an area on which he rarely speaks – tourism. Interestingly, the indefatigable culture and tourism promoter (Salami), who lavishly admired the expansive Olusegun Obasanjo Presidential Library, Abeokuta, where she was hosted, published and launched three books just in July, attracting many stakeholdres to Asaba, capital of Delta State. With a resourceful mind like hers, therefore, it is safe to say the best is yet to be seen.