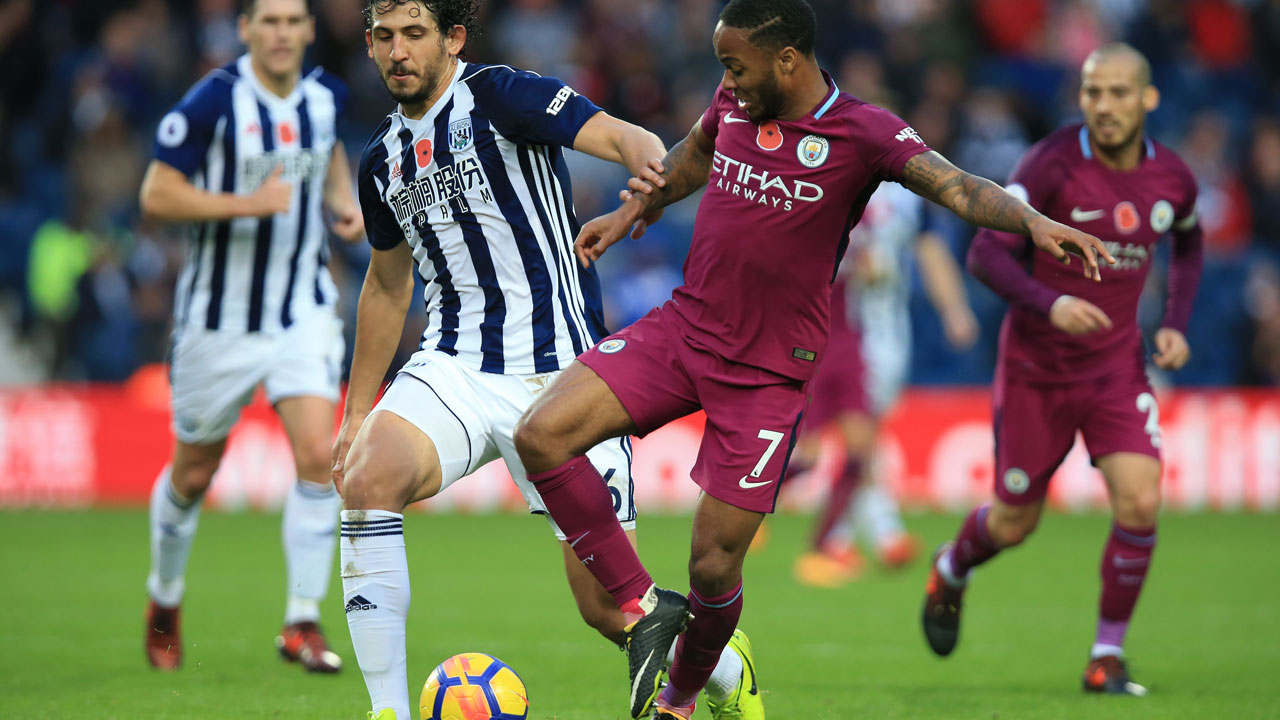 Sergio Aguero was left waiting to become Manchester City’s outright all-time leading goal-scorer as his side remained five points clear at the top of the Premier League table on Saturday.

Aguero was named on the bench as City saw off West Bromwich Albion 3-2, having failed to surpass the club record of 177 goal he shares with Eric Brook during a midweek League Cup penalty shoot-out win over Championship side Wolves.

City manager Pep Guardiola blamed Aguero’s failure to score against Wolves on the different ball used in the League Cup and there were three goals in a frantic five-minute spell at The Hawthorns on Saturday.

Leroy Sane produced a stunning strike to give City a 10th-minute lead only for West Brom’s Jay Rodriguez to equalise soon afterwards.

But come the 15th minute, City were 2-1 up after Fernandinho left fly with a speculative shot that deflected off Gareth Barry and went in off the post.

City substitute Raheem Sterling gave the visitors a two-goal lead with a close-range finish in the 64th minute only for the Baggies’ to pull a goal back late on through Matt Phillips after a defensive blunder.

Second-placed Manchester United and Tottenham Hotspur had both started the day level on points but Jose Mourinho’s men edged ahead after substitute Anthony Martial’s goal nine minutes from time gave them a 1-0 win over a Spurs side missing injured England striker Harry Kane.

It was just the result United manager Mourinho would have wanted after slamming his players’ attitude following a shock 2-1 loss to Huddersfield last week.

“We all feel we have to win every match so that’s why I felt disappointed at Huddersfield,” Mourinho told Sky Sports. “Today, every ball looked like the last ball of their careers.

This was Spurs’ second defeat of the week after their League Cup loss to London rivals West Ham.

“It was unlucky that in the last 10 minutes we conceded our goal,” said Spurs manager Mauricio Pochettino. “It was our mistake,” he added after his defence failed to deal with a long clearance from United goalkeeper David De Gea that Romelu Lukaku headed on to Martial.

Meanwhile Spurs’s arch north London rivals Arsenal had to come from behind to see off struggling Swansea 2-1.

The Gunners fell behind when Sam Cluca scored with Swansea’s first touch inside the Arsenal penalty area to put the visitors 1-0 up in the 22nd minute.

But Arsene Wenger’s men were back on level terms early in the second half at the Emirates when Sead Kolasinac rifled a shot past former Arsenal goalkeeper Lukasz Fabianski from 15 yards out.

Kolasinac then turned provider for Aaron Ramsey as the Wales midfielder made it 2-1 in the 58th minute.

Liverpool missed a penalty but still beat Huddersfield 3-0 in a match that pitted Reds manager Jurgen Klopp against Terriers boss David Wagner — the best man at his wedding.

Shortly before half-time, Liverpool were awarded a penalty after Tommy Smith grabbing Roberto Firmino’s shirt only for Mohamed Salah to fire his spot-kick straight at Jonas Lossl.

But Daniel Sturridge broke the deadlock five minutes into the second half before Firmino doubled the lead in the 58th minute with a header from a corner.

Gini Wijnaldum then added a third late on.

Meanwhile Wilfried Zaha’s goal in the seventh minute of stoppage time saw basement club Crystal Palace came from 2-0 down to salvage a 2-2 draw with West Ham in a London derby at Selhurst Park.

Javier Hernandez and Andre Ayew, with a 25-yard shot that went in off the crossbar, put the Hammers 2-0 up before Palace pulled a goal back through a penalty from Luka Milivojevic.