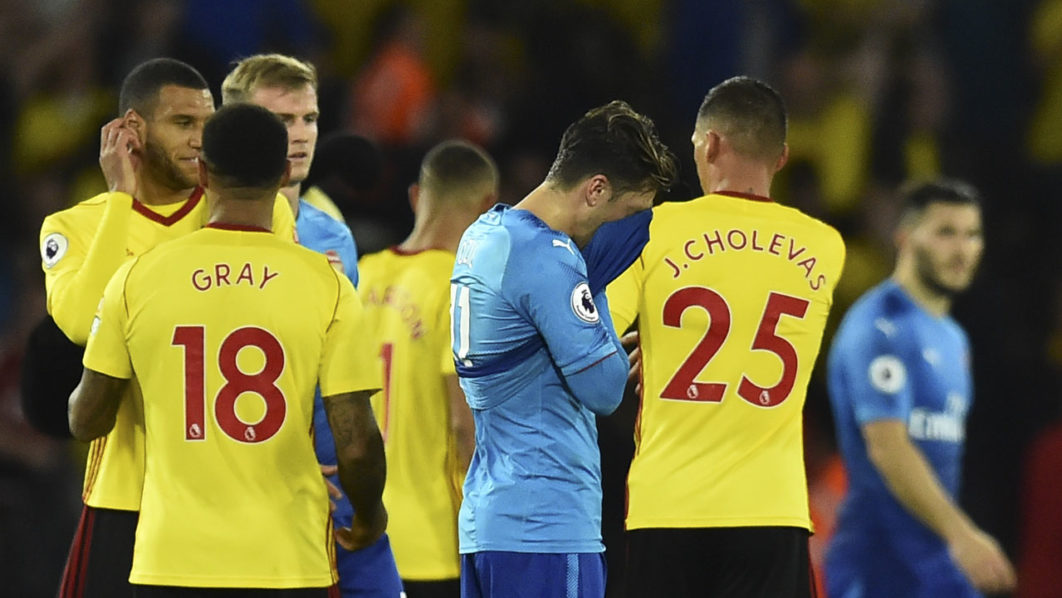 Watford’s Troy Deeney has accused Arsenal’s stars of lacking fight after the Gunners crashed to a shock 2-1 defeat at Vicarage Road.

Deeney scored Watford’s second-half equaliser with a penalty and Tom Cleverley capped the hosts’ fightback with a stoppage-time winner.

Gunners boss Arsene Wenger was furious with what he felt was a ‘scandalous’ decision award the spot-kick for Hector Bellerin’s challenge on Richarlison.

But Deeney mocked Wenger’s complaints and insisted Arsenal should be more concerned with the way they were bullied into the surrendering the lead by Watford’s physical approach.

“I’ve heard Wenger’s already blaming (the decision) as the reason why they lost,” Deeney said.

“I’m not going to be the one to tell Mr Wenger about himself, but there’s a reason why they lost and it wasn’t because of one penalty.

“Whenever I play Arsenal, I’ll go up and think, ‘Let me whack the first one and see who wants it’.

“I came on and jumped with (Per) Mertesacker. I didn’t even have to jump, actually – I nodded it down.

“The crowd gets up – ‘Yeah, we’ve got somebody who can win it’ – and they all just backed off.

“For me as a player I just think, ‘Happy days’. That’s my strength.

“I know I’m not technically gifted like they are, not as quick, but if you want to fight with me, I’m gonna beat you all day.”