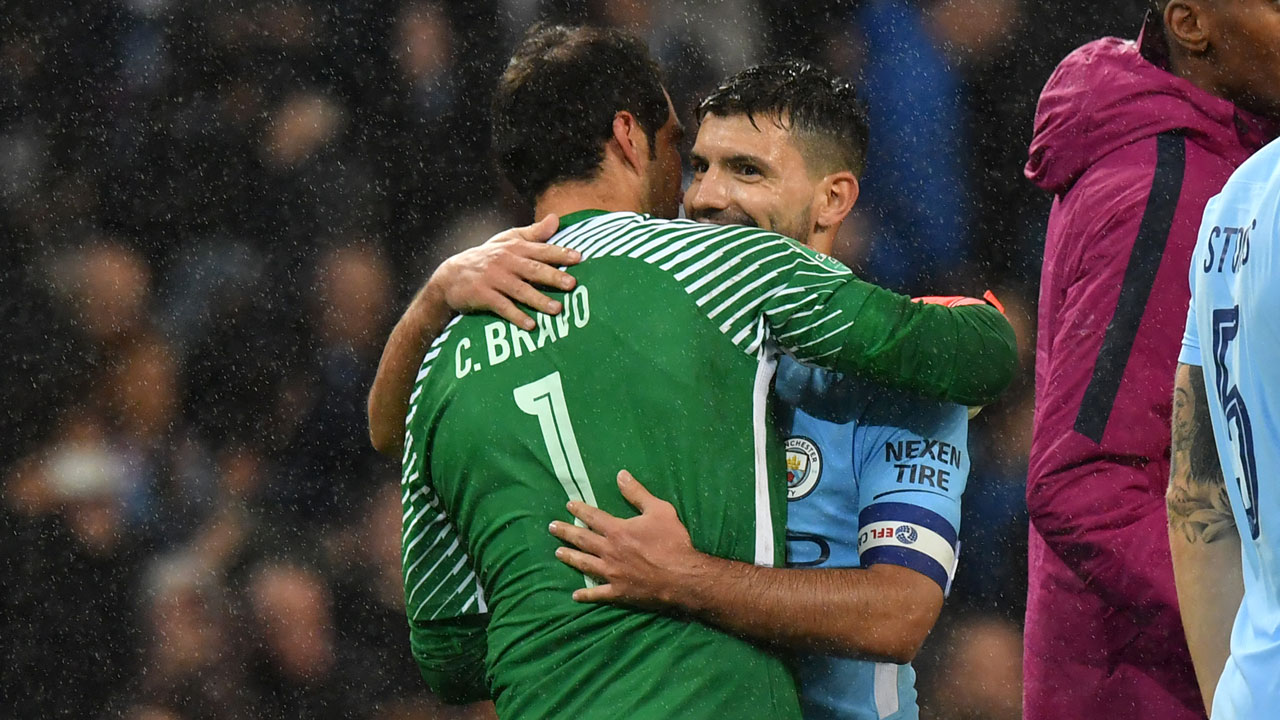 Manchester City goalkeeper Claudio Bravo was the Premier League leaders’ hero as they beat Championship table-toppers Wolves in a penalty shoot-out to book their place in the quarter-finals of the English League Cup on Tuesday.

Despite chances at both ends, the Etihad Stadium clash was still scoreless after 30 minutes of extra time, sending the tie to spot-kicks.

Bravo, much criticised after some unconvincing displays last season and making just his third appearance of this campaign, saved successive penalties from Alfred N’Diaye and Conor Coady in a shoot-out where the kicks were taken using the ABBA formula.

But as the Argentina striker’s effort was scored in a shoot-out he remains level with Eric Brook’s City record of 177 goals for the Manchester club that has stood since 1939.

“Last season was not easy for Bravo, but he is a goalkeeper of a high level,” said Pep Guardiola, the City manager. “He deserved that performance.”

Arsenal, who changed their entire side from the 11 that beat Everton 5-2 in the Premier League last weekend, were five minutes away from losing to second-tier Norwich City at the Emirates.

But England Under-19 striker Eddie Nketiah equalised for the Gunners just 15 seconds after coming off the bench to send the game into extra-time at 1-1 with his first senior goal after Josh Murphy’s chip had given the visitors the lead.

And the 18-year-old Nketiah ensured Arsene Wenger’s men would be in the quarter-final draw when he headed home the winner.

“I knew he had quality, but when the team need you and you deliver, that’s another quality you don’t know about until you go on to the pitch,” said Wenger, who has been in charge of Arsenal since 1996

“I’m impressed to think that he was not even conceived when I was already here!,” the veteran French boss added. “Hopefully he’ll have a long career at Arsenal.”

Premier League basement club Crystal Palace were knocked out after suffering a 4-1 loss away to Bristol City despite taking the lead at Ashton Gate.

Bakary Sako put the Eagles ahead in the 21st minute. But second-tier Bristol City hit back through goals from Matt Taylor, Milan Djuric, Joe Bryan and Callum O’Dowda.

Managers at both ends of the Premier League table often regard the League Cup as an inconvenience and Palace’s latest loss was not so surprising given Roy Hodgson, the former England boss, had made 10 changes to the London club’s line-up.

“I took a risk — I take responsibility for that,” Hodgson said. “We’ve had a couple of tough Premier League games and played quite well in both of them, in my opinion.”

This result gave Mourinho a win in his 400th game in English football and he told Sky Sports: “Of course I still get the same thrill from it, but 2004 was a long time ago.”

“I am more mature and have a different way to react to things,” the Portuguese manager added. “I’m the same. I want to win and I hate losing.”

Bournemouth, fresh from just their second Premier League win of the season last weekend, enjoyed a 3-1 victory at home to Middlesbrough while Leicester City, without a manager since sacking Craig Shakespeare, came from a goal down to beat Leeds United, like Boro a Championship club, by the same scoreline.

Wednesday’s ties see Chelsea face Everton in the Toffees’ first match since Ronald Koeman was sacked as their manager while high-flying Tottenham Hotspur face West Ham in an all-London clash.