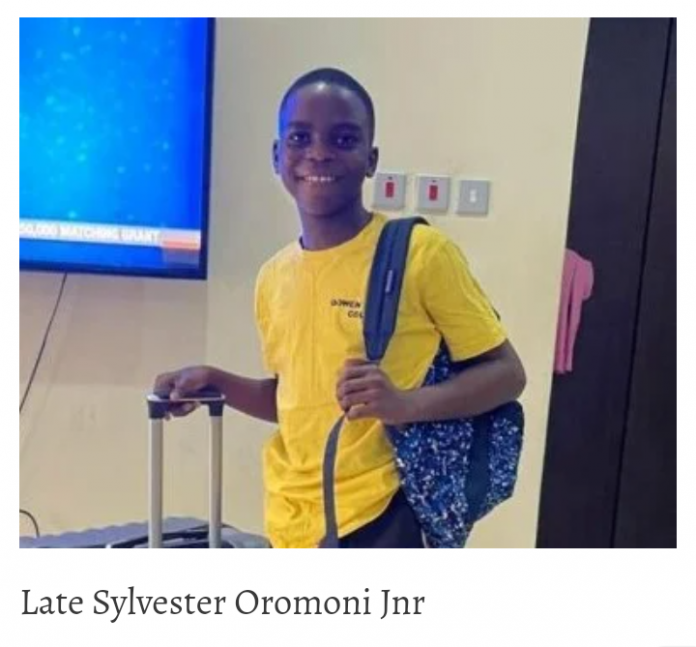 The family of 12-year-old Sylvester Oromoni (Junior), a pupil of the Dowen College, Lekki, Lagos, who died under controversial circumstances, has demanded a coroner inquest into his death.

The news of Sylvester’s death went viral last Wednesday following a social media post by his cousin, Perry Oromoni, who alleged that some senior pupils of the college beat him up in his hostel because he refused to join a cult.

But the school denied the claim, stating that the boy complained of leg pains following an injury he sustained while playing football.

The state government, on Friday, ordered the indefinite closure of the school pending the outcome of an investigation into the matter.

Officials of the Lagos State Ministry of Education stormed the school in the early hours of Sunday and sealed the premises.

The Falana and Falana Chambers, on behalf of the family, petitioned the chief coroner of Lagos State on Monday, demanding an inquest into the death.

The petition read in part, “We have been briefed by the family of the late Sylvester Oromoni, a student of Dowen College, Lekki, Lagos, who died from the injuries he allegedly sustained from the beating by his colleagues who wanted him to join their cult.
Given the needless death of Sylvester Oromoni, we are compelled to request you to use your good offices to cause a coroner’s inquest to be conducted into the cause of death of this young and promising boy and make appropriate recommendations pursuant to Section 15 of the Lagos State Coroner’s Law 2007, which provides that an inquest shall hold whenever a coroner is informed that the death of a deceased person within his coroner district is as a result of a death in a violent, unnatural or suspicious situation.”
Meanwhile, the wife of the governor of Lagos State, Dr Ibijoke Sanwo-Olu, has commiserated with the parents of the victim.

Mrs Sanwo-Olu spoke on Monday during the Sexual and Gender-Based Violence advocacy visit to Dolphin Junior and High School on the Lagos Island.

She said, “I am aware that the Lagos State Government is at the moment investigating the incident and honestly, it is something we are not happy about. It is a big slap on the face of the education sector, the community, and Lagos State as a whole.

“It is a case that is being investigated and for the parents and everybody involved, honestly, we commiserate with them and send our condolences.”