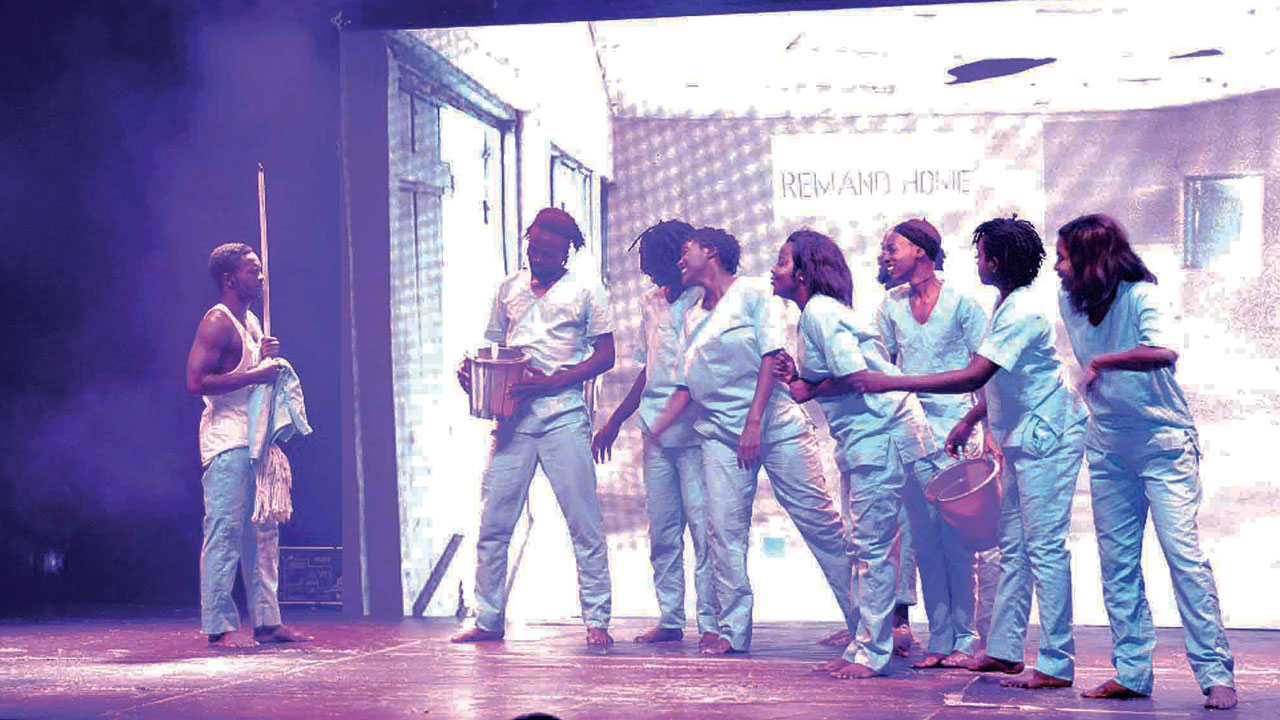 A scene from the play

The saying that ‘after a dark night comes daylight’ is a truism for a lot of people. Not least was it true for former President Olusegun Obasanjo, who left death row prison in Yola to become president after trumped up charges of coup plotting to overthrow then military head of state, Gen. Sanni Abacha. However, there was another silver lining on that dark prison skyline that Obasanjo helped to light up. It was the story of a fellow prisoner, one Gula, who would regain freedom and salvation after what seemed like a long spell in hell.

Performed in a joint production at Terra Kulture Theatre Arena, Lagos, by Tunde -led Ashvault Ltd and Ayo Ajayi-led De-Classical Arts and Entertainment, with direction from Kenneth Uphopho, Gula is the story of Obasanjo’s (Tunji Sotimirin) experience and prison encounter with one Baba Ali (Paul Alumona), a hardened armed robber and murderer awaiting trial in prisoner for six years. Gula was a man, who had sold his soul to the devil in exchange for a life of ruthlessness and brutal savagery.

When Obasanjo meets him in prison, he is the boss the other prisoners bow to. This piques Obasanjo’s interest and he desires to know who he is, but he rebuffs Obasanjo’s interest in him, particularly as Obasanjo sets up a prayer session he wants all the prisoners to attend. Baba Ali will hear none of it. To stave him off, he asks his boys to join Obasanjo in his evangelical foolery. He tells Obasanjo his case is so hopeless he doesn’t think there is redemption or salvation or forgiveness for him, either here on earth or in heaven. But Obasanjo persists in his mission to get Baba Ali to have another on life in spite of his seeming hopelessness.

In time, however, Obasanjo’s persistence begins to pay off. But this happens only after a visit from Baba Ali’s wife. Gula’s wife Kalban (Lydian John) comes visiting with a heavy heart. She could no longer live with him for remaining endlessly in prison. She has taken a decision to remarry another man, with whom she already has two daughters. Baba Ali is distraught with grief; his only pillar is being taken from him. How is he to face life without his wife, the only thing of value he could lay claim to him, along with his two daughters?

Beaten on the home front so miserably, with nowhere else to turn, Obasanjo becomes the only human being left. Baba Ali eagerly turns to the VIP prisoner and unburdens his heart to him. And in a flashback, we learn Gula’s criminal odyssey…

For Baba Ali, who was christened Gula by his parents, life started from innocent pranks and a desire to be independent early. But his father (Paul Adams), a school principal’s strict upbringing, would not condone such rascality from his son; he applies the rod. But this does not deter Gula, as he grows bold in his escapades. When his father hands him over to a remind home, Gula acquires all the criminal tricks and arsenals he needs.

By the time he returns home, Gula is doing drugs and selling same to his schoolmates. He soon joins petty stealing gang until he meets his old teacher (Julius Obende), who is already a hardened armed robber. But he dies on their first outing in an encounter with the police. Gula then reconsiders his options; he approaches a cult of medicine men to fortify him against arrest, gunshots and cutlass injuries. He gets his wishes fulfilled, but with one condition: his sexual activities must be restricted only to his wife!

For a criminal, this seems like a talk order, but Baba Ali is willing to go along with it. After the fortification, Gula is reborn ‘Baba Ali’ and he discards Gula. And then he goes on rampage with his gang, terrorising society, inflicting mayhem on all and sundry, while remaining invincible to the police to track. But his nemesis arrives, when he returns home to a distraught wife his frequent night outings for raids has rendered desperately lonely; she cries her heart out to him. Unfortunately, he cannot make love to her because she is seeing her period. So, he takes his desire elsewhere (to his judge girlfriend, who provides him legal escape routes) much against the wishes of the charmed life he lives. The police come calling and he is shot and wounded. Thus begins his long road to prison without trial for six years until Obasanjo shows up to point him another world.

LIKE his spiritual godfather, Obasanjo, who went from prison to presidency, Gula also went from prison to pulpit. Today, he is a preacher of the gospel of Christ, courtesy of Obasanjo’s inspiration and who also sponsored him to a Baptist Seminary in Kaduna after a special prerogative of mercy offered him escape during the visit of a senior state official, who orders his release. He could not be tried for want of evidence. Gula could not believe his luck, which he puts down to special favour from God, whose service he embraces wholeheartedly.

The play, Gula, is an expose of the country’s poor policing and legal systems, which makes it difficult for Gula to face trial for his heinous crimes so he could properly serve jail term. However, he makes good on his unmerited release by turning a new leaf and serving as agent of good behaviour for society. Parental upbringing is another point Gula raises. How do parents raise children? Is tyranny a healthy option? Does it have consequences?

What is more, the play is a direct indictment of Obasanjo’s poor leadership, as a former prisoner, who rose to the apex of political power and yet failed to lift a hand to correct the rut in Nigeria’s prison system. Such a shame that he forgot that experience so easily, but was quick to claim Gula as the creation of his evangelical work during his prison spell with a book he wrote and from which the play is adapted, The Story of Baba Ali: Juvenile Delinquency and Criminality – Who Is to Blame?

With the famous trio of Uphopho directing action, Gbenga Yusuf directing dance and Ayo Ajayi directing music (from Saro the Musical experience), Gula couldn’t go wrong on all performance fronts. The action, the dance and the music harmonised in a thrilling manner that gave the audience value for its time. But it is somewhat curious that the three police, who arrest Baba Ali, turn out to be his prison warders as well. How did this happen?

However, to cap an evening of enjoyable performance, the man Gula, aka Baba Ali, and his wife, who returned to him after deserting him as a prisoner, turn out in flesh and blood and spoke to the audience about their journey and Christian experience since the prison. Already, plans are underway to take Gula outside Lagos to parts of the north for performance.

Just In: 13 Killed Over A Thousand People Rendered Homeless In Adamawa