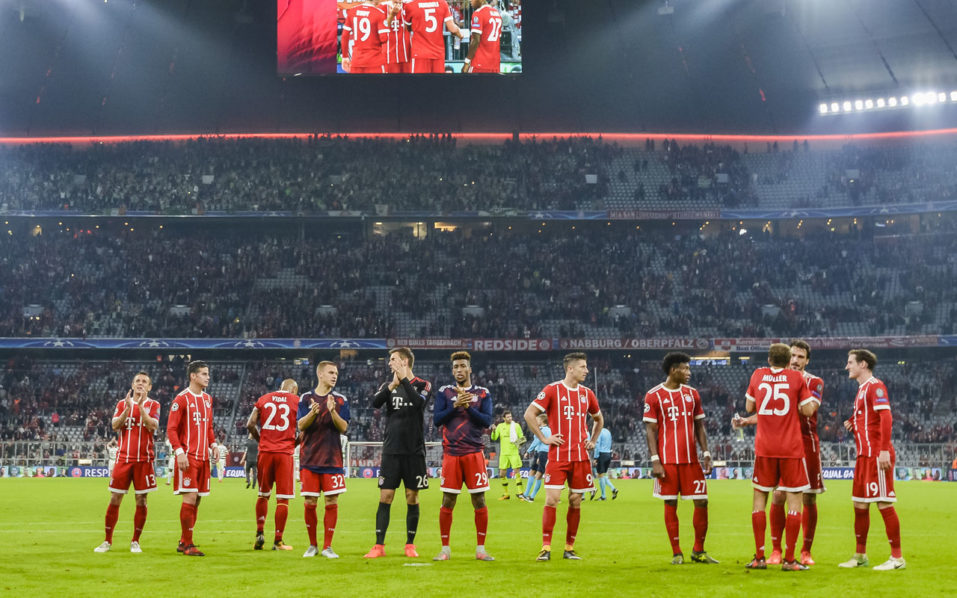 Jupp Heynckes said he enjoyed seeing Thomas Mueller return to form as Bayern Munich got their Champions League campaign back on track with a 3-0 home win against Celtic.

Bayern captain Mueller put the hosts ahead after 17 minutes before goals by Joshua Kimmich and Mats Hummels sealed the victory on Wednesday at the Allianz Arena.

The result leaves Bayern second in Group B on six points, three behind leaders Paris Saint-Germain and three clear of third-placed Celtic.

It was an important result for Bayern in the wake of their 3-0 drubbing in Paris three weeks ago, which led to Carlo Ancelotti’s dismissal.

Heynckes, 72, came out of a four-year retirement for his fourth stint as Bayern coach to replace Ancelotti.

He restored Mueller to his prefered attacking midfield role, allowing him to happily roam just behind Robert Lewandowski, with Thiago Alcantara dropping into a deeper position.

“Thomas put in a good performance, he ran a lot, was very present and we saw the old Thomas Mueller,” said Heynckes.

“He’s an established player, the captain and it’s good to see him playing well again.”

Mueller struggled for form under Ancelotti and was often played out of position.

But while the Germany star was delighted to see Bayern pick up the three points in Europe and build on Saturday’s 5-0 thumping of Freiburg in the Bundesliga, he said there is room for improvement in their finishing.

“The attitude was better, we were motivated after the win at Freiburg and wanted to use the momentum,” said Mueller.

“That was an important three points.

“We created a lot of chances in the second half which we should have used.”

Heynckes was also unhappy with Bayern’s finishing — pointing to the 29 shots on goal which yielded only the three goals.

“We created a lot of chances that we didn’t take advantage of and, at the other end, let them have a few themselves,” said Heynckes.

“We were a bit negligent there and we cannot let that happen.

“You need to be completely alert from the first to last minute.”

Rodgers sees Celtic positives
The trio of James Rodriguez, Arturo Vidal and Corentin Tolisso, Bayern’s record signing, all started on the bench, but Heynckes said they will get their chances.

“It’s necessary to develop momentum and win the first few games, either in the Bundesliga or Champions League,” said Heynckes.

“For that reason, we cannot afford to experiment much with new players.

“But I spoke to all the players that weren’t involved to ensure them that they do have a role in the team, especially with a busy schedule coming up.”

Celtic coach Brendan Rodgers said he had seen enough positives to give him hope for the return meeting at Parkhead in a fortnight.

“There were lots of elements, in particular the second half, where we played well and looked a real threat,” said the Celtic boss.

“I was disappointed with the nature of the goals, but there were positives, like how we built our game from behind.

“There was no denying we played against a top-class side and we didn’t defend our box well enough when the crosses came in.

“I’d rather lose a game playing how we want to play, rather than defend for 90 minutes and still lose.

“The players had a plan and there were a lot of positives and things for us to use going forward for the second leg.”

The defeat confirmed that Celtic will likely have to focus on holding off Anderlecht to take third place in the group and parachute into the Europa League.

“We need to be realistic against who we are playing against, but the players gave their all tonight,” added Rodgers.

“The goal for us remains to still be in Europe after Christmas.”