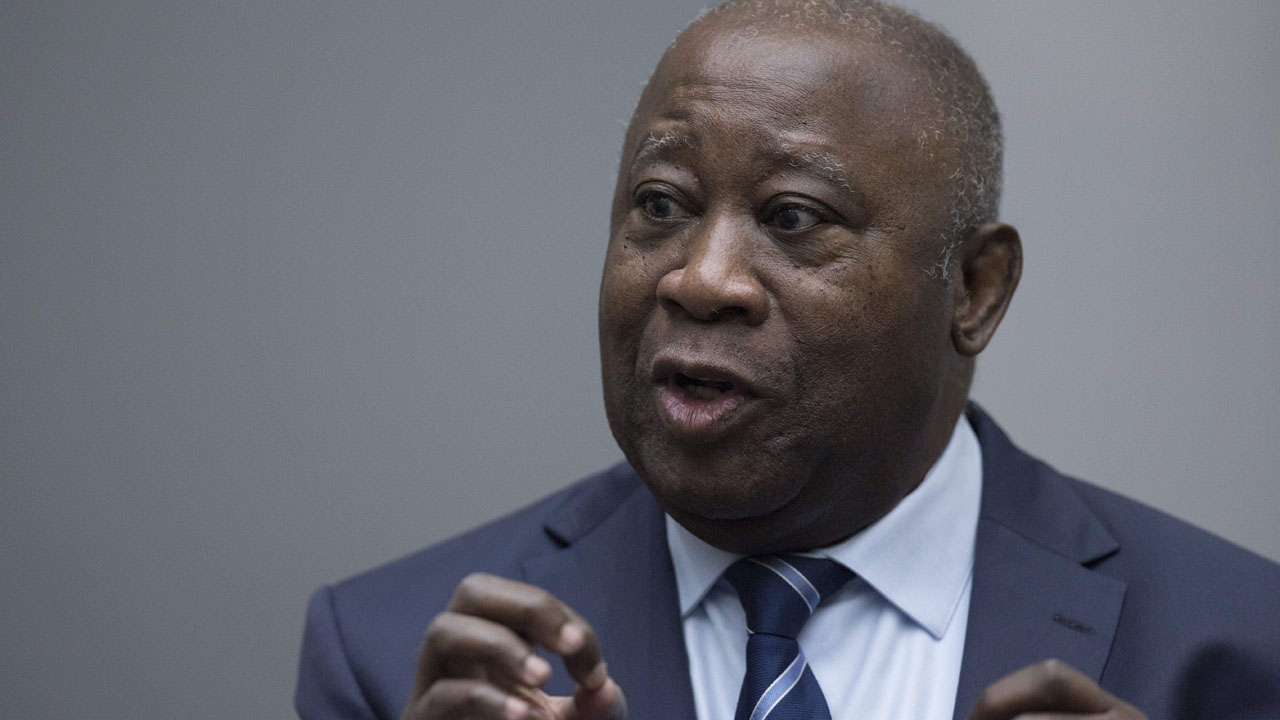 Former Ivory Coast President Laurent Gbagbo gestures as he enters the courtroom of the International Criminal Court in The Hague on January 15, 2019, where judges were expected to issue rulings on requests by Gbagbo and ex-government minister Charles Ble Goude to have their prosecutions thrown out for lack of evidence. – The International Criminal Court on January 15 acquitted former Ivory Coast president Laurent Gbagbo over post-electoral violence in the West African nation in a stunning blow to the war crimes tribunal in The Hague. Judges ordered the immediate release of the 73-year-old deposed strongman, the first head of state to stand trial at the troubled ICC, and his right-hand man Charles Ble Goude. (Photo by Peter Dejong / ANP / AFP) / Netherlands OUT

Ivory Coast’s former president Laurent Gbagbo will on Friday appeal against his continued detention at the International Criminal Court following his acquittal on charges of crimes against humanity.

The 73-year-old ex-strongman remains behind bars despite the fact that judges in The Hague cleared him and his right-hand man Charles Ble Goude of all charges in January.

Gbagbo and Ble Goude stood accused of orchestrating a wave of violence after disputed elections in the West African nation in 2010. The crisis claimed around 3,000 lives.

Prosecutors successfully applied to have Gbagbo kept in jail while they challenge the January 15 decision to acquit him, but his lawyers will make their case to appeals judges to have him freed.

Judges will have a number of options including keeping Gbagbo locked up; freeing him unconditionally to return to the Ivory Coast; or releasing him on condition that he stay in an ICC member state such as Belgium.

Prosecutors and lawyers for victims of the violence in Ivory Coast will also present their arguments.

Court sources told AFP they expect the appeals judges to defer their decision to a later date “to take some time for deliberation and preparation of their written decision”.

Even if they do make a decision to free Gbagbo on Friday, it would take several days to complete the administration and logistics for his release.

‘Exceptionally weak’
The pair had been on trial for two years over violence in Ivory Coast after Gbagbo refused to concede defeat in an election to bitter rival and now-president Alassane Ouattara.

Atrocities were allegedly committed on both sides as the bloodshed turned Abidjan into a war zone and destabilised the African economic powerhouse, the world’s largest cocoa-producing nation.

Gbagbo was captured in 2011 by Ouattara’s troops, aided by UN and French forces, and sent to stand trial at the International Criminal Court.

Prosecutors are expected to seize on the dissenting judge’s view that “there is evidence upon which a reasonable trial chamber could convict the accused.”

The case was a severe blow for ICC prosecutors after similar failures with former DR Congo warlord Jean-Pierre Bemba in 2018 and Kenyan leader Uhuru Kenyatta in 2014.

Stung by the decision, ICC prosecutors said they would appeal the acquittal and called for Gbagbo and Ble Goude to stay in detention.

ICC prosecutors cited the case of Gbagbo’s wife Simone as an example of why he is a flight risk, saying that despite an outstanding ICC warrant for her arrest, the Ivorian government has not surrendered her.

The delay in Gbagbo’s release at least puts off for now the political uncertainty over his possible return.

His acquittal comes at a sensitive time with Ivory Coast facing fresh elections in 2020 to elect a successor to Ouattara, who has said he will not stand for re-election after serving two five-year terms.