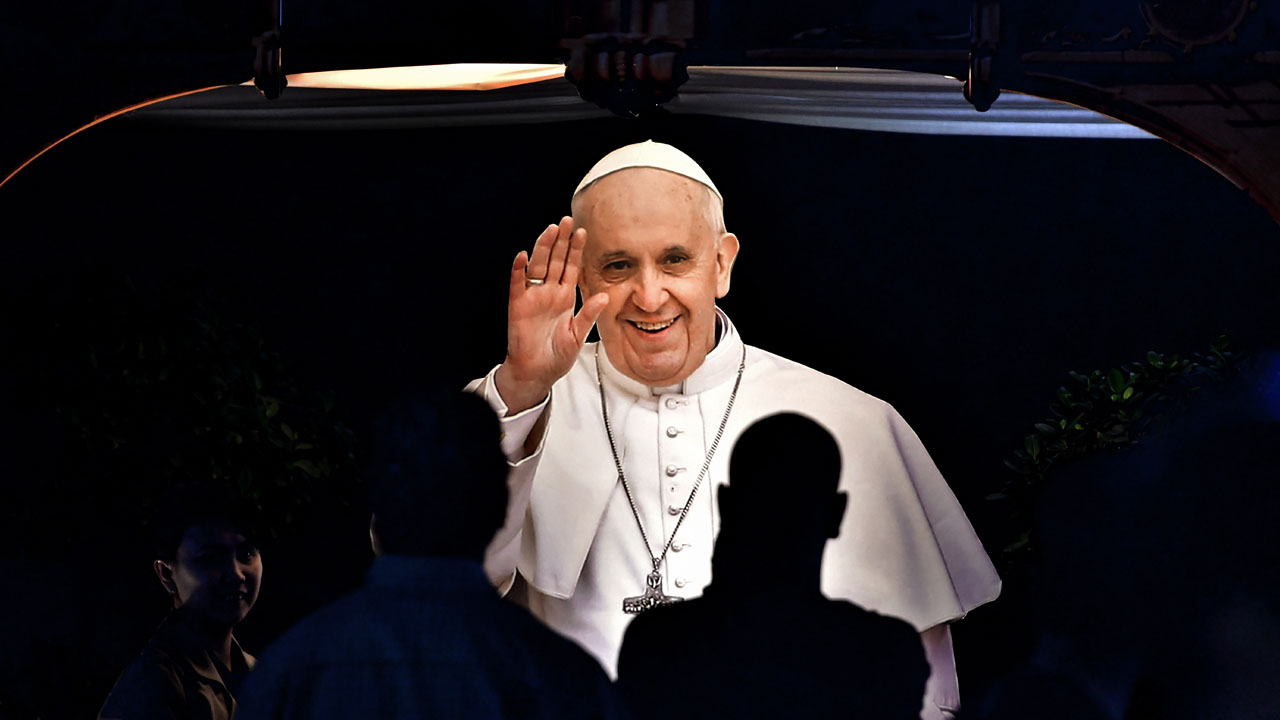 Men look at a cutout image of Pope Francis as another person takes a picture of the cutout itself, days ahead of the papal visit to the United Arab Emirates, at St Mary’s Catholic Church in Dubai on January 30, 2019. (Photo by GIUSEPPE CACACE / AFP)

Pope Francis is set for a historic trip to the UAE, the first ever papal visit to the Arabian Peninsula, as he seeks to boost the Vatican’s outreach to Islam.

The Argentine pontiff’s trip to the United Arab Emirates “couldn’t have come at a better time”, said Bishop Paul Hinder of the Apostolic Vicariate of Southern Arabia which encompasses the UAE, Oman and Yemen.

“With advanced communication tools at everyone’s disposal, we are better informed, and this can be put into a broader perspective when we couple it with dialogue,” he told AFP.

Pope Francis, who has made strengthening ties between the two largest religions a cornerstone of his papacy, will head to Abu Dhabi on Sunday.

During his three-day visit, the pope will take part in an international interfaith conference and meet with Sheikh Ahmed al-Tayeb, the imam of Cairo’s Al-Azhar, Sunni Islam’s most prestigious seat of learning.

While there were no plans “at the moment” for a papal visit to other Gulf countries, according to Hinder, the pope’s trip to the UAE is widely seen as a gateway for more interreligious dialogue in the region.

The Vatican continues to have good relations with rulers of the six-country Gulf Cooperation Council, said Hinder.

‘Peace and love’
The UAE which has made no secret of its push on soft power prides itself on its religious tolerance and cultural diversity, and most Gulf Arab states have long allowed Christians to worship in churches.

The UAE, however, has been criticised by rights groups for its involvement in a Saudi-led coalition fighting in Yemen, where more than 10,000 people have been killed since 2015, according to the United Nations.

It was also criticised for upholding a 10-year prison term against human rights activist Ahmed Mansoor on December 31 two weeks after the UAE declared 2019 the Year of Tolerance.

Abu Dhabi Crown Prince Mohammed bin Zayed al-Nahyan, who invited the pope to the UAE, on Thursday described the pontiff as “the man of peace and love”.

“We are hopeful that generations to come will prosper in peace and security,” he said in a tweet anticipating the meeting between the pontiff and Sheikh Ahmed.

In a video message to the Emirati people on Thursday, Pope Francis said: “I am happy … to write on your dear land a new page in the relations between religions, confirming that we are brothers although different.”

On the last day of his trip, Pope Francis will lead a mass in Abu Dhabi attended by more than 130,000 people expected to be the largest UAE gathering ever, according to local media.

‘Second chance’
Catholics attending the open-air mass queued up for hours at St Mary’s Catholic Church in Dubai on Wednesday to collect their tickets.

Parishes across the country were allocated a certain number of passes with St Mary’s Catholic Church receiving 41,000 tickets, according to priest Lennie Connully.

He said more than 50,000 members of the congregation had requested access to the historic mass at Zayed Sports City stadium, adding: “We are still trying to give to all… because there may be extras in other parishes.”

Connully also said that communion arrangements have been made with the help of 1,200 lay ministers to accommodate the large number of attendees.

“Everyone who wants to take communion, will get it,” he told AFP.

More than 2,000 buses will be transporting worshippers from across the country to Abu Dhabi, with most departing in the early hours of Tuesday morning way ahead of mass that is scheduled for 10:30 am (0630 GMT).

For Filipina Mylene Lao Estipona, 43, a cancer survivor, the hours-long journey from Dubai to the capital and the long queues to see Pope Francis is a small price to pay for a life-long dream.

She said her faith gave her a “second chance” at life and the strength to beat cancer.

“I thank God that I have a ticket. I really prayed, and it’s an answered prayer,” said the dental hygienist, who has been living in the UAE for 13 years.

“He already went to the Philippines, but we’re here and we’re working full time… At least now we have a chance to see the pope.”

‘People’s pope’
The UAE has the largest number of Catholic churches in the region with eight. Oman, Kuwait and Yemen each have four, while Qatar and Bahrain have one each.

Nearly 80 percent of the population of the UAE is Muslim, while Christians constitute around nine percent, according to the CIA World Factbook.

According to Hinder, nearly one million Catholics live in the emirates, the majority from the Philippines and India.

Pope Francis, who made history when he was named the first Latin American pontiff in 2013, is known as the “people’s pope”, listening to and warmly embracing people from different walks of life.

“Latin culture is an exuberant culture, an outgoing culture, quite different from European culture,” Connully says with a smirk.

“They are very different people, very congenial, easily make friends. That is seen in Pope Francis.”