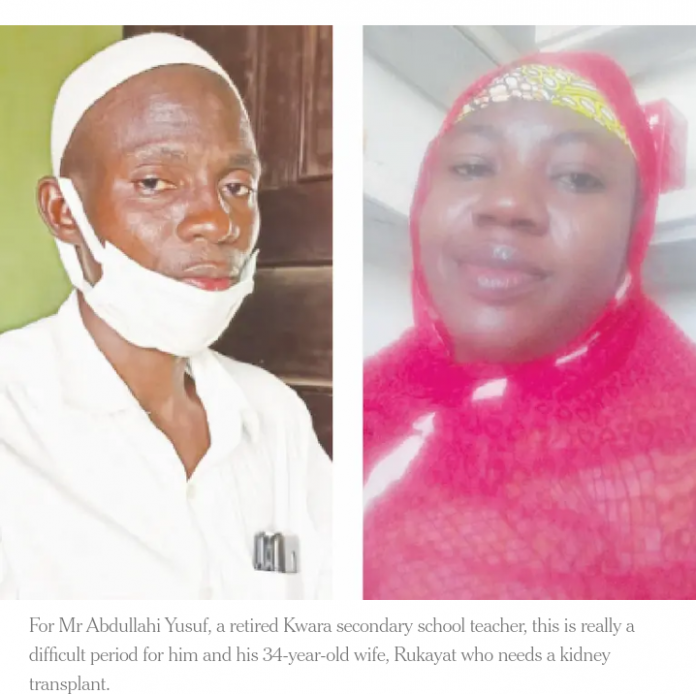 For Mr Abdullahi Yusuf, a retired Kwara secondary school teacher, this is really a difficult period for him and his 34-year-old wife, Rukayat who needs a kidney transplant.

Narrating his plight to North Central Trust he said although they got married in 2013, they only have a daughter as they have to terminate five additional pregnancies because of her condition.

According to him, the whole issue first started when the wife was having extreme High Blood Pressure during subsequent pregnancies after the birth of their first child.

He said “We got married in 2013 but she could only give birth to our only daughter and child who is now eight years old. She used to experience blood pressure as high as 200 in her subsequent pregnancies during the fourth or fifth month and we terminated five in the process in order to save her life. One of the pregnancies even got to the seventh month which almost cost her life.

He said at  a point, medical experts attributed the situation to fibroid and . were referred to a private hospital where they were asked to get N150,000 for a surgical operation.

“As a private school teacher, I was unable to raise the money. But we have visited several other health facilities and were told at a time that she had chronic hypertension.

“However, our visit to the University of Ilorin Teaching Hospital (UITH) changed everything when she was diagnosed with chronic kidney disease by the Nephrology unit and they recommend we do transplant as the best solution for her case.’’

He said  the doctor advised that the treatment was beyond him  and his family’s financial capacity and was given a medical report to seek assistance’, he added.

Abdullahi, who solicited for “financial support from all Nigerians to fund the kidney transplant” said his wife had been bed-ridden for one year now and could hardly talk.

“Her treatment has been financially draining to our families and well-wishers as we spend at least N106,000 weekly on her two dialysis and medication. Now we are helpless and unable to continue”.

He explained further that his wife collects 2-3 pints of blood daily with weekly estimates put at N120,000.

“Initially, to save cost, I and other relatives volunteered to be donating blood but we were forced to stop because of health reasons and the fact that we still have to do the running around to get money for her treatment.

“She is currently having two dialysis weekly with the total cost of treatment to cost a whopping N15,000,000 in addition to a few months of post-transplant drugs.

“This is far above and beyond what our entire family and well-wishers can afford. We are financially exhausted. We look up to Allah SWT through Nigerians to save the life of my wife”, he added.