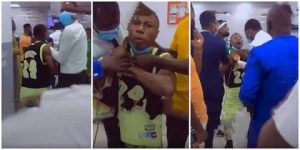 A man has stormed a bank in Nigeria to vent his anger over unauthorised deductions from his account.
The customer arrived at the bank premises with a rope and threatened to kill himself.
According to him, the bank transferred his money to hackers who compromised his account.
The man had earlier reported an unfamiliar transaction of N450,000 on his account to the bank.
The bank directed the man to get a court order to prove he had no business with the recipient of the money.
The complainant reportedly got the court order only to be informed by bank officials that the transaction had been carried out in favor of the supposed hacker.
The bank officials in the video and some customers struggled to collect the rope from the angry customer.
The incident was said to have happened at United Bank For Africa (UBA) Iju branch, Lagos. 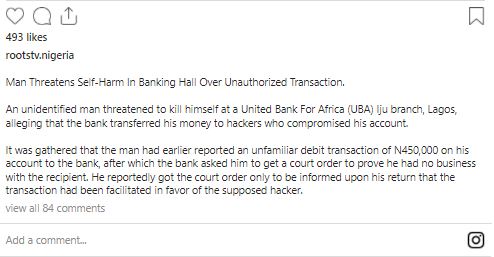