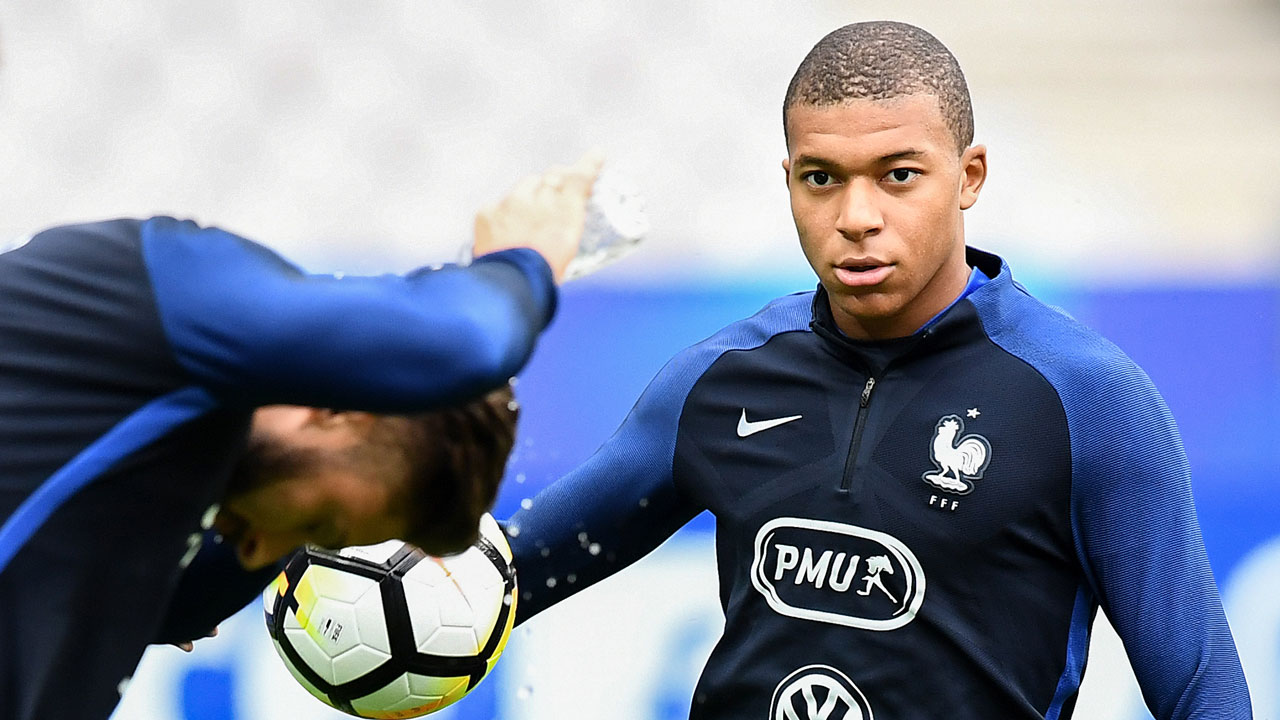 France's forward Kylian Mbappe (R) holds the ball next to France's forward Olivier Giroud during a training session at the Stade de France stadium in Saint-Denis, north of Paris, on the eve of the team's FIFA World Cup 2018 qualifying football match against Belarus, on October 9, 2017.  FRANCK FIFE / AFP

Like the rest of his team-mates, Mbappe failed to impress on Saturday in France’s crucial 1-0 win in Bulgaria that kept their World Cup destiny in their own hands.

Victory on Tuesday at home to minnows Belarus would secure their ticket to Russia 2018. And even though Paris Saint-Germain forward Mbappe struggled in Sofia, Tottenham’s Lloris believes he will come good.

“He wasn’t inhibited at all, but he needs to string some France matches together,” said Lloris, the France captain. “It’s difficult to judge a player on his performance against Bulgaria. It was a battle, very tight.

“Kylian is still a young player, he has time to reach his objectives, even though, already at 18, he’s able to make the difference in big matches.”

Despite being on the brink of qualification, France have come in for much criticism during this campaign, not least after a dreadful 0-0 draw at home to Luxembourg last month.

But Lloris brushed off the brickbats. “I’ve said it before, the main aim is to win. But if we want to do so over the medium to long term, then we need to perform,” he said.

“We know that everything is not perfect. After Bulgaria, there was frustration because we didn’t manage to play well. “But we managed to win over there. We need to give all these young players time to make their mark in the French team.”

France’s struggles have contrasted sharply with neighbours Germany’s romp through their pool with a perfect 10 wins from 10 matches. But France coach Didier Deschamps said it was unfair to compare the two.

“Germany are used to flying and they’re doing it again,” said Deschamps, France’s most successful coach with 42 wins. “Compared to my team, their generation has a lot more experience.

“They were world champions in 2014 but they started in 2006 and have passed by quarter-finals, semi-finals and lost finals before being crowned.

“There’s no fast-track way (to winning). I’d prefer to have an unimportant match tomorrow (Tuesday), but it’s good that this match is decisive for us.”

Since 2006, when Germany reached the World Cup semi-finals on home soil, only to be beaten by eventual champions Italy, they have always made it to at least the last four in a major championship.

In that same period, France have failed to make the semi-finals at any tournaments except the 2016 Euros and 2006 World Cup, in both of which they were beaten finalists.