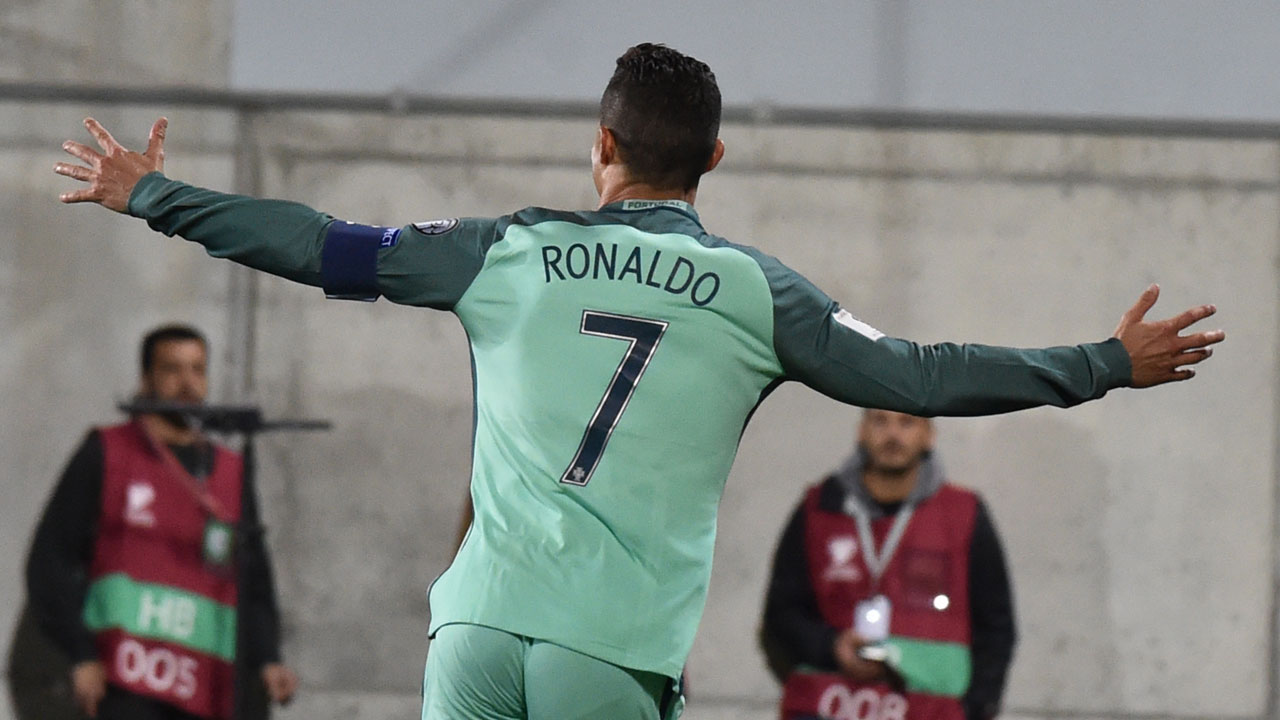 Portugal's forward Cristiano Ronaldo celebrates after scoring a goal during the FIFA World Cup 2018 football qualifier between Andorra and Portugal at the Municipal Stadium in Andorra la Vella, on October 7, 2017. PASCAL PAVANI / AFP

Portugal superstar Ronaldo is attempting to match Lionel Messi’s record by winning the prize for a fifth time after his starring role in Real Madrid’s first La Liga and Champions League double in 59 years.

Ronaldo has claimed the prestigious honour in three of the past four years, with Argentina standout Messi last collecting the trophy in 2015 following Barcelona’s treble-winning campaign.

The pair have combined to win the award — organised by France Football magazine — every year since former Brazil and AC Milan star Kaka won it in 2007.

Ronaldo remains the strong favourite despite still searching for his first league goal in the 2017/18 season after serving a five-match domestic ban following his dismissal in the Spanish Super Cup.

Messi has profited from his rival’s absence to spearhead Barcelona’s stunning start to the campaign, scoring 11 goals in the first seven matches while adding two more in Europe.

But both players remain in danger of missing the 2018 World Cup.

European champions Portugal could be forced to negotiate next month’s play-offs unless they defeat Group B leaders Switzerland in their final qualifier on Tuesday.

Two-time World Cup winners Argentina are outside the top five in South American qualifying ahead of a tricky trip to Ecuador in their last match, although victory would at the least put them into a two-legged play-off against New Zealand.

Brazilian forward Neymar moved to Paris Saint-Germain in August for a world-record 222 million euros ($264 million) to step out of Messi’s shadow at Barcelona.

The 25-year-old has enjoyed a seamless transition to French football with a return of eight goals in as many games as PSG look to upset European football’s established order.

PSG are the second best represented club with three players — Neymar, Edinson Cavani and Kylian Mbappe, who is set to seal a 180-million-euro move next summer after arriving on a season-long loan from Monaco.

Harry Kane, one of 12 players nominated for the first time, is the lone Englishman on the shortlist, but there are seven Premier League nominees in total as Chelsea duo N’Golo Kante and Eden Hazard were recognised for their contribution to last season’s title-winning campaign.

Arsenal striker Olivier Giroud, Venezuela Women’s forward Deyna Castellanos and goalkeeper Oscarine Masuluke of South African outfit Baroka are the three finalists for the Puskas Award — a FIFA accolade for the “most beautiful goal” of the season.