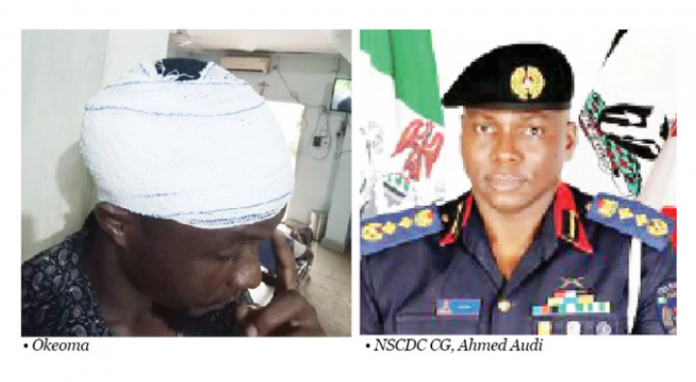 Some personnel of the Nigeria Security and Civil Defence Corps attached to the Federal Girls Government College, Owerri, on Monday, brutalised the Imo State correspondent of PUNCH Newspapers, Chidiebube Okeoma.

The operatives, who thereafter arrested and bundled him to their command headquarters, tagged him an operative of the Eastern Security Network, the militant arm of the Indigenous People of Biafra.

While one of the NSCDC operatives hit him with the butt of his rifle, the other punched him in his left eye and smashed one of his smartphones.

The journalist was released after he was interrogated by a senior officer at the command headquarters.

Okeoma was later treated at the Chapel Group Hospital, Ikenegbu-Owerri, after he lost a lot of blood.

The journalist, while narrating his ordeal, said, “We were at the FGGC, Owerri, to meet the school’s principal over a viral video where a senior student of the school was seen bullying a junior student. At the gate, the security men (NSCDC officers) stopped us and on inquiry, they said that the principal was not around.

“I asked them to take us to the vice-principal and they said he was not on seat. I asked them to take us to the next-in-command; they asked us to return next week. I told them that it was urgent, and this was when they started bullying me.
Thereafter, two armed NSCDC officers emerged and started beating me. One of them hit me with the butt of his rifle and my head was broken. While in a pool of my own blood, they dragged me barefooted to their command headquarters like a common criminal. While I was being dragged to their headquarters, one of the officers said I came to kidnap the students. He labelled me a member of the Eastern Security Network.
At their command headquarters, I was interrogated by a senior officer and was later allowed to go. I immediately went to a hospital and was treated. I have gone to the Shall Camp Police Division to make a statement.”

The reporter, who noted that one of the officers threatened to kill him, said he reported the matter at a police station in the area.

However, the state Commissioner of Police, Rabiu Hussaini, who sympathised with our correspondent, said only the NSCDC could redress the wrong.

He urged Okeoma to report to the nearest command of the agency.