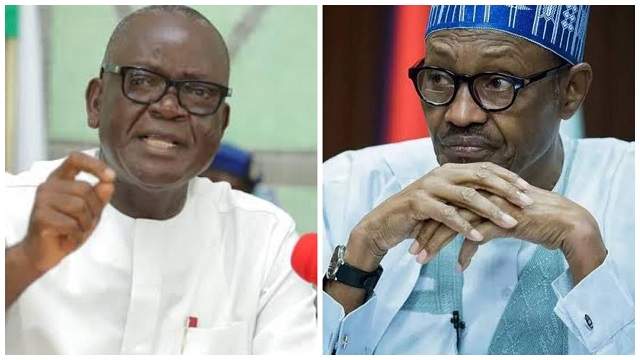 Governor Samuel Ortom of Benue State on Monday berated the administration of President Muhammadu Buhari.
Ortom said the worst military government ever in the country is better than the present All Progressives Congress (APC) government.
Ortom made the remarks while answering questions from journalists in Makurdi, Benue State capital, shortly after his return from Abuja convention of the Peoples’ Democratic Party (PDP).
He said that the outcome of the convention of his party is a clear sign that the PDP has positioned itself to take over leadership of the country in 2023, alleging that the current APC administration haas failed in all ramifications.
“We (PDP) are determined to take over leadership of this country, come 2023 because of the failure of APC led government.
“They are being deceitful and not being able to secure our land. They have rather succeeded in destroying our economy, our security, our social life and everything you can think of in this country.
“I have been privileged to read the history of Nigeria and those that have been destroying us including the military. Usually, we say that the worst democratic government is better than the military government.
“That is what we use to say but for the purpose of APC led government, I want to say that the worst military government we have had in Nigeria is better than this particular government led by APC.
“I have never seen anything like this; people who don’t want you to tell them the truth or advise them, try to twist things and tell the world that you are against them. Is it not democracy we are practicing?”
The governor, however, commended his colleagues for their resilience to forge ahead in what he described as, “despite all intimidation and blackmail by the APC government” to achieve more than 90 percent consensus in electing new leaders for the PDP.