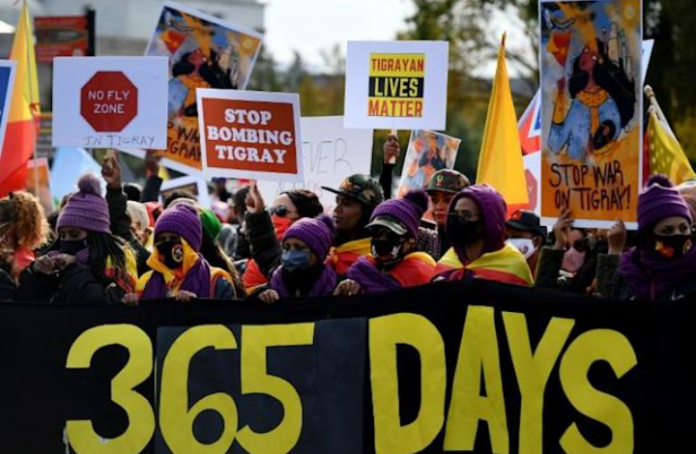 Hundreds of protesters demonstrated in Washington on Thursday to demand an end to what they called a “genocide” in Ethiopia’s Tigray region, a year after the country’s government launched an offensive there that sparked a devastating conflict.

The protesters, drawn from the Ethiopian diaspora in the United States — many with family members in Tigray — marched behind a banner denouncing “365 days of genocide in Tigray.”

Placards carried by protesters were emblazoned with messages including, “Stop bombing Tigray,” “Allow access to Tigray,” “Using starvation as a weapon of war is a violation of international law” and “Our ethnicity is not a crime.”

“We’re here from all over North America,” said Zuher Ibrahim, who lives in New York and was part of the march organizing committee.

“Tigrayans are being subjected to mass arrests in the capital of Ethiopia, Addis Ababa, and the famine continues to loom over the people of Tigray, and West Tigray is under a complete lockout,” she told AFP, adding the conflict had led to increased sexual and gender-based violence.

One year to the day since the start of the conflict between Tigrayan rebels and forces sent by Prime Minister Abiy Ahmed to the northernmost Ethiopian region, the violence continues to escalate.

Abiy promised a swift victory when war broke out last November, but by late June the TPLF had retaken most of Tigray and begun pushing south.

Fighting has killed thousands and driven hundreds of thousands of people into famine-like conditions, according to UN estimates.

Ethiopia Condemns US Sanctions On Eritrea

UK To Train Nigerian Navy On Fight Against Piracy, Others

Afghanistan: I Know That This Entire Situation Has You Triggered, Broken And Wanting To Suit Up – Tyler Perry Writes To US Soldiers

World Must Be Ready For Next Pandemic, Says UN