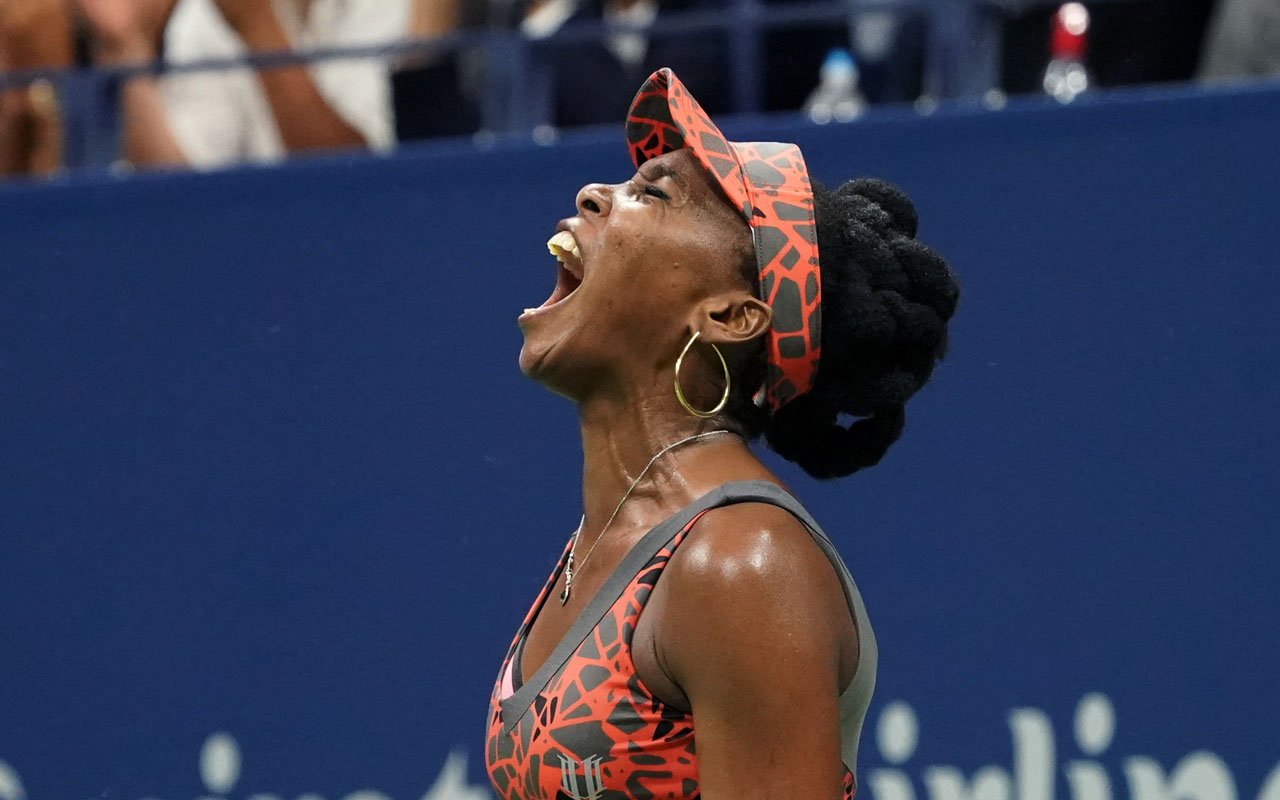 Venus Williams of the US reacts winning a point against Czech Republic's Petra Kvitova during their 2017 US Open Women's Singles Quarterfinal match at the USTA Billie Jean King National Tennis Center in New York on September 5, 2017. / AFP PHOTO / Don EMMERT

Williams, 37, came from a set down to triumph 6-7 (7/3), 6-2, 6-3 in two hours and 29 minutes at the Singapore Indoor Stadium. The American will be aiming to end a nine-year WTA Finals title drought when she plays Wozniacki on Sunday.

Garcia, playing in her WTA Finals debut, looked gassed at times as the match wore on, having played a two hour and 19 minute marathon against Wozniacki on Friday.

Williams claimed the decisive break in the eighth game of the third set before her clutch serving saw her overcame three break points and claim a memorable victory.

“Every time I thought I was close, she (Garcia) would play amazing,” Williams said after the match.

“It is hard to produce your best tennis at the end of the year because you’ve given so much. Nothing is easy. It’s amazing to almost be in the winner’s circle.”

Both players were coming off impressive victories to qualify and continued their rich form during a high-octane opening set. They traded breaks early before Garcia squandered a set point in the 10th game.

Consecutive double faults from Williams early in the tiebreak handed the world number eight the initiative and she capitalised to win the first set lasting 65 minutes.

Williams looked in grave trouble when she faced two break points in the first game of the second set but she fought back to hold serve and then broke Garcia in the next game.

Williams’ trademark serve and her powerful groundstrokes started dictating, as she stormed through the second set in just minutes.

The seven-time grand slam winner will be the oldest finalist in WTA Finals history when she plays Wozniacki. Even though she had a stellar season reaching two grand slam finals, the world number five will be seeking her first title of the year.

She has now won two of three against Garcia in the pair’s first clash since 2014.

Earlier, a tireless Wozniacki stormed into the final with a straight sets victory over Karolina Pliskova, ending the Czech’s dreams of finishing world number one.

Wozniacki said she kept “fighting” through a marathon 82-minute first set, where she held off three set points in the 10th game and almost blew a 6-1 lead in the tieback.

“It went back and forth,” she told reporters after the match.

“It was very important to win the first set. I think that broke her a little bit. I think it was important for both of us to get that first one.”

Pliskova said she would not stew over missing out on the top ranking. “I’m absolutely fine with that,” she said. “This is the last thing that I’m thinking about now.”

Long rallies, with both in-form players slugging from the baseline, highlighted a grinding start. There was little separating the pair with holds of serve hard to come by.

Wozniacki seemingly had a stranglehold of the match with an early break in the second set only for Pliskova to storm back. But she had a decisive break in the eighth game and then served it out to book her spot in the final.

Pliskova needed to lift the trophy on Sunday to overtake world number one Simona Halep in the rankings. Even though she didn’t make the semis, Halep has now secured the year-end world number one ranking.