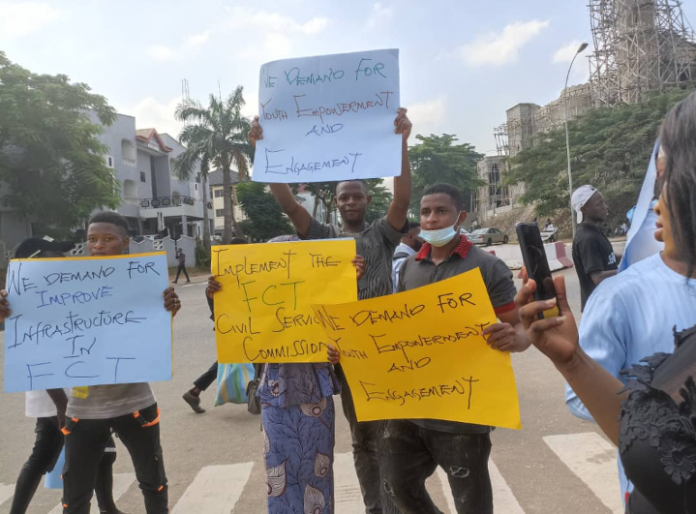 Some youths in the Federal Capital Territory have decried the spate of insecurity in the nation’s capital.

The Youths under the aegis of FCT Youths Stakeholders Forum also lamented the state of infrastructure in Abuja.

According to them, there had been a decline in governance and quality of service delivery in FCT in the last few years.

Addressing journalists during a protest at the Federal Capital Territory secretariat on Monday, one of the leaders of the group, Ahmadu Yunusa said the situation in the nation’s capital “resembles communities with absence of a government”.

He said, “Within the last few years, the Forum has noted a decline in governance and quality of service delivery in FCT which has led to the rise in insecurity, infrastructural deficit, drop in the quality of education and health service delivery, ineffective transport system, and increase in the number of ungoverned spaces in the FCT, etc.

“Gradually, the situation of FCT is beginning to resemble communities with absence of a government.

“The inability of the management of the FCTA to actively engage stakeholders to find lasting solutions to some of these challenges is one of the factors hindering effective service delivery in FCT.”

He, however, demanded that the current security architecture be overhauled, adding that the security agencies should be strengthened to stem the tide of the rising insecurity among others.

He said, “The Forum also demands the strengthening of the FCT Community Policing Programme to enhance intelligence gathering in communities and address the incessant security challenges facing FCT residents.

“In addition, the Forum demands the construction or rehabilitation of major roads in communities across the FCT to ensure ease of access to residents and other road users within those communities.

“Also, the forum demands that the Abuja University of Science and Technology should commence operations to create jobs for people and access to tertiary education for more Nigerians.

He added that the FCT Transport System should be better managed to ensure ease of movement for FCT residents and other transport service users.

Yunusa also asked that the FCT Civil Service Act be implemented to ensure career progression and adequate remuneration of Civil Servants in the Federal Capital Territory.

Receiving them, the Permanent Secretary FCTA, Adesola Olusade said many roads were being constructed in the FCT.

He said, “Abuja has returned to a construction site, works have resumed on many roads. Those in Dutse can bear witness to what has been done in that area.

“In the area of security, six persons were kidnapped and within three days they were rescued without ransom, this is unparalleled. It would not have happened if the security structure is not working.”

Nigeria Governors To Meet Over Insecurity