Home Health Nigeria To Pass Bill On Elimination Of Trans Fat, Says WHO 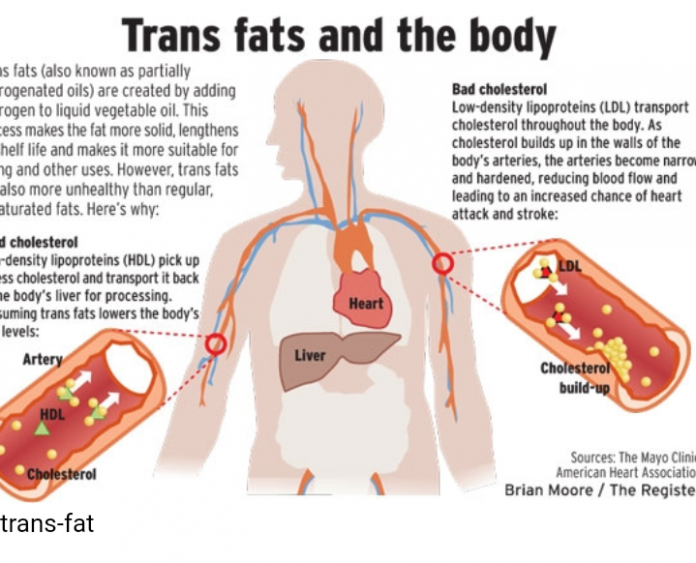 The World Health Organisation says Nigeria is poised to create an actionable policy on the elimination of trans-fat.

The WHO disclosed this in a new report.

WHO disclosed this in a press release issued on Tuesday to provide an update on efforts by nations to eliminate trans-fat by 2023.

Trans-fat is an artificial compound that can be found in cakes, cookies, biscuits, packaged foods, cooking oils and spreads and is linked to increased risk of heart attacks and death from heart disease.

Eliminating trans-fat from the global food supply could save lives and reduce the burden on health care by preventing heart attacks, the UN health body said.

According to the press release, only forty countries have best-practice trans-fat elimination policies which protect 1.4 billion people around the world from the deadly food compound.

However, WHO acknowledged the efforts of Nigeria to become the second African country, after South Africa, to pass the policy on trans-fat elimination in near future.

The release in part reads, “Other countries made advances that are likely to result in the passage of trans fat elimination policies in the near term: Nigeria is also moving a policy which is expected to pass soon, making it the second country in Africa after South Africa to put a best-practice trans-fat elimination policy in place.”

Speaking, the WHO Director-General, Dr. Tedros Ghebreyesus congratulated countries on their efforts in developing and implementing policies on trans-fat elimination.

He noted that “the clock is ticking on our call to accomplish the global goal of eliminating industrially-produced trans-fat by 2023.

“The first-ever global elimination of a risk factor for non-communicable diseases is within our reach; all countries must act now to protect their people from this harmful and unnecessary compound.”

On his part, President and CEO of Resolve to Save Lives, Dr. Tom Frieden stressed that it is the government’s responsibility to protect its people from toxic ingredients.

The report also revealed that 10 out of the 15 countries estimated to have the highest burden of industrially produced trans-fat have not adopted a best-practice trans-fat policy: Egypt, Iran, Mexico, Azerbaijan, Ecuador, Pakistan, Republic of Korea, Bhutan, Nepal and Australia.