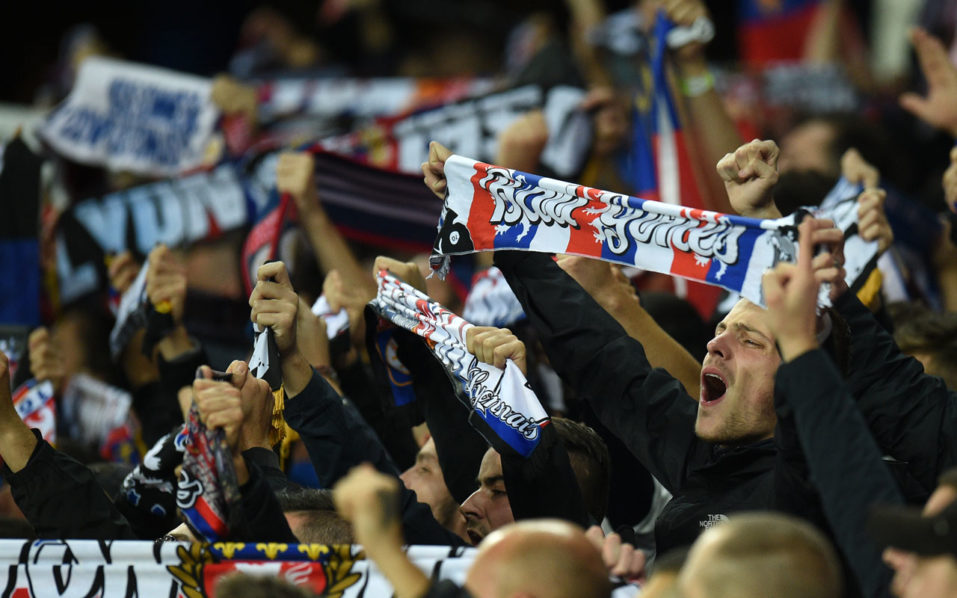 Lyon's supporters cheer on their team during the UEFA Europa League Group E match between Everton and Lyon at Goodison Park, in Liverpool on October 19, 2017. / AFP PHOTO / Oli SCARFF

British police said Friday they are investigating crowd trouble at the previous evening’s Europa League match at Goodison Park, during which an Everton fan holding a child appeared to strike a Lyon player.

Thursday’s ugly scenes erupted after Ashley Williams barged into Lyon goalkeeper Anthony Lopes midway through the second half of the 2-1 victory for the away side.

“Merseyside Police can confirm officers are investigating following a disturbance on the pitch during a football match between Everton and Lyon at Goodison Park last night, Thursday 19th October,” they said in a statement.

“Detectives will be reviewing footage and speaking to witnesses to establish what, if any, offences have been committed.”

Everton said they have identified one of the supporters involved in the disturbance and that individual would be banned from Goodison Park, though it was not immediately clear if it was the fan holding the child.

Both clubs are also expected to be subject to disciplinary proceedings from European governing body UEFA following the melee.

Players from both sides became embroiled in the fracas, which moved to the advertising hoardings, where one Toffees fan, holding a child, appeared to push Lopes in the head before hitting out at him again.

While that was occurring, Williams seemed to raise his hand to Lucas Tousart’s face. However, he avoided dismissal, with both the Everton captain and Lyon’s match-winner Bertrand Traore booked.

“I think the irritation grows in the game for our players and in my opinion that was the problem by the referee,” Koeman said.

“The referee was Dutch but he didn’t do anything against the theatre of some of the Lyon players. (Nabil) Fekir in the first half dived 10 times. I understand with my players, that comes out of frustration.”

It compounded another miserable night for Everton and Koeman, who is under mounting pressure with his team having won just two of their previous 12 fixtures.

“I think the performance was under the level in the first half — a lot of mistakes, a lot of doubts, players without any confidence,” the Dutch coach said.